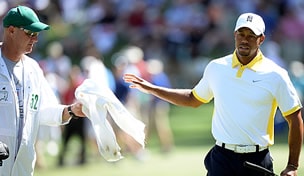 AUGUSTA, Ga. – At precisely 4:52 p.m., here deep among the blooming azaleas and Georgia pines, Tiger Woods made all Augusta National’s proper patrons forget it’s been eight years since he last won the Masters.

Or maybe he made them remember.

Maybe he made them remember a time when many took for granted Woods' greatness around these hallowed grounds; back in a time when most believed Woods would win more green jackets than Jack Nicklaus, win 20-plus major championships with the greatest of ease and make mincemeat out of the PGA Tour for as long as his competitive heart desired.

It was there in the middle of the 10th fairway Friday that Woods became co-leader of his beloved Masters. Woods had just torched the front nine to the tune of 33 – with birdies at Nos. 5, 7 and 8 – and launched a massive blow off the 10th tee when Australian Marc Leishman bogeyed the 14th hole to back up to a 5-under-par total.

The roars were back, electricity was in the air and Woods was seemingly in the driver’s seat tied with unproven Leishman and 53-year-old cool cat Fred Couples. Sure, it was midway through Round 2 but many had seen this act before and remembered how it always ended.

Woods had the swing to match the swagger. He launched a missile at the flag on the infamous par-3 12th hole that flew over the back and into a bunker. The approach at 14 was a laser shot over the flag. The tee ball at 16 was right at the flag but landed a foot short of Woods’ desired spot and landed in the bunker. Yet all the three previous scenarios, for better or worse, ended in par – which on this difficult scoring day was nothing to be displeased with.

“Yeah, my ball striking was so good today,” Woods gushed. “Even my misses were on top of flags.”

Misses were, in fact, on top of flags, but Woods’ best shot of the day ended with a terrible result after hitting a flagstick. Woods was on cruise control after finishing Amen Corner (Nos. 11-13) unscathed and making par on 14, then missed the fairway at the par-5 15th hole. He punched out to a juicy 87 yards to give himself a nice chance at birdie.

Woods’ wedge shot clanged off the bottom of the flagstick and rolled back into the drink. After taking a brief moment to compose himself, Woods took a drop and hit wedge to 4 feet and converted the bogey, his first of the day.

“I felt it was a pretty good shot,” Woods said. “I was pretty pissed. It was looking like I’m going to make birdie and now I have to struggle to make bogey. It was a good (bogey), but I felt I played really well today in a round that should have been in the 60s.”

Jason Day leads at 6 under and is desperately trying to break a Masters curse that has prevented an Aussie from donning the green jacket. Couples and Leishman are tied for second at 5 under. Woods is at 3 under in a seven-way tie for seventh place.

“Going back two years ago in the final round, he was 5 under through nine holes, so, he can make it up in nine holes,” Day said about Woods. “I don’t need to worry about him. The moment I start worrying about other players is the moment I start losing focus on what I need to do, and when I do that, I’ll start making bogeys.”

You can be certain Woods isn’t worrying about others either. He knows this toonamint, as they say in these parts, is just beginning. We are only midway through and 26 players are within five shots of the lead.

But let’s throw some stats out there to chew on.

When Woods collected his last Masters victory in 2005 he was in third place after two rounds, four strokes back; In 2002, he was tied for fourth, four back; In 2001 he was two strokes behind and tied for second place. (Note: In the 1997 romp Woods was three ahead after two rounds and cruised to his first green jacket.)

Translation: Woods has never been in worse than a fourth-place tie after two rounds in any of his four victories. He has however, come from as many as four strokes back twice after 36 holes. He’s three back now.

It didn’t seem so tricky during that span when Woods was on top of the leaderboard. One ill-timed flagstick and one uncharacteristic three-putt later and Woods appeared mortal again. That’s all it took.

“He's the best player in the world at the moment, and obviously I'd have to play good to beat him,” Leishman acknowledged. “But I think it's doable. He'll probably get annoyed now and shoot 62 tomorrow.”

If he does, it’ll erase the patron’s eight-year Masters itch just as quickly as it did Friday.