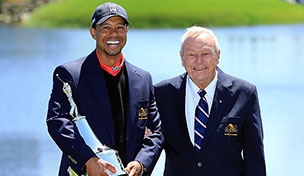 ORLANDO, Fla. – Even after a 20-hour weather delay, even after a brief surge by Rickie Fowler, the outcome here at Bay Hill seemed predetermined, not least because Tiger Woods is the best closer in sports not wearing pinstripes.

No, it’s because golf’s new king looks an awful lot like the old one – pumping his fist and twirling his irons and holing clutch putts. Everything you remember about Red Shirt.

“It feels really good,” Woods said, reclining in a chair in the winner’s news conference, wearing the customary blue blazer. More than 30 text messages had arrived on his phone within minutes of his two-stroke victory at the Arnold Palmer Invitational. He tapped out thank-you notes as fast as his fingers allowed.

Woods appears happy again. Genuinely happy. Perhaps that’s because of his newly confirmed relationship, to skier Lindsey Vonn, or maybe his return to championship form. It was natural to wonder if Tiger could ever truly be happy again without both.

By capturing his third title of the season Monday (and second in his last two starts), Woods has won six of his last 20 PGA Tour starts. Six of his last 20 – that’s an absurd winning percentage of 30 percent, slightly above his career average of 27 percent.

“I feel like this is the Tiger I grew up watching,” Keegan Bradley said.

More absurdity: Woods has captured 41 PGA Tour titles on seven courses, Bay Hill included. Forty-one wins – or, in other words, as many victories as Phil Mickelson has enjoyed during his Hall of Fame career, and seven more than Vijay Singh, and 19 more than Ernie Els.

“I don’t think that’s his ultimate goal,” said his caddie, Joe LaCava, of reaching world No. 1, “but it’s certainly a nice bonus.”

Technically, Woods’ reign atop the world order may last all of a week, even if it feels like we experienced a seismic shift in the golf landscape Monday. Next week, McIlroy could regain the No. 1 spot in the world with a victory in Houston, the continuation of a generational tug-of-war that shapes the sport. But this has the distinct feel of a vintage Tiger year. Your move, kid.

That mentality alone drives home the fact that we’re light years from Oct. 30, 2010, when Woods last held the No. 1 ranking. At the time he was less than a year removed from the tabloid-fueled scandal that ruined his family life, shattered his public image and precipitated a brief downturn in his game.

He suffered a stunning loss to Graeme McDowell at his own World Challenge. A year later, he injured his Achilles’ tendon at the Masters, forcing him to withdraw from The Players, skip the U.S. Open and British Open, and then bomb out at the PGA. In November 2011, he was ranked 58th in the world.

It was a “perfect storm,” Woods said. He was making a swing change, and he was hurt, and he couldn’t devote any time to practice the new motion. Were there any doubts about whether he would ever win again, or reach world No. 1? Please. When he’s healthy, and when he’s making putts, he wins.

“If I get healthy, I know I can play this game at a high level,” he said. “Once I got there, then my game turned.”

Last year was decidedly more Tiger-like, and that resurgence began here, at Arnie’s place, where Woods won a full-field PGA Tour event for the first time in 923 days (this was his eighth victory at Bay Hill, matching a Tour record for most wins in an event). He would win two more times, at Memorial and Congressional, but was strangely absent in the major championships, when he didn’t break par in eight weekend rounds. They were bizarre disappearing acts.

“Maybe my game wasn’t quite consistent enough to be there at that point,” he said.

Now, though, his mind is no longer clouded with swing thoughts. He’s more confident, the motion more ingrained. On the range Monday morning, in a brisk and steady crosswind, Woods worked through each club in the bag, wedge through driver, swinging each in perfect balance and rhythm. His swing coach, Sean Foley, stood some 50 yards away and watched Hunter Mahan, another of his pupils. For the last half hour of his warm-up, Woods’ only interaction with Foley was a fist bump on the putting green before heading to the third tee for the restart. He’s self-sufficient.

For Woods, the resumption of the final round produced little stress, at least until he needed to hole a 7-foot par putt on 11. A hole later, and after watching Rickie Fowler drain a 37-footer to pull within two shots of the lead, Woods buried a 27-footer, raising his putter skyward as he walked toward the cup.

“That’s just the competitor he is,” Fowler would say afterward. “He just finds a way to make a putt and keep things going.”

The biggest swing of the day came on the 16th hole. Two behind as he played his second shot into the par 5, Fowler rinsed his approach from 188 yards – and eventually carded a triple-bogey 8 – setting the stage for a Woods exclamation point.

He didn’t disappoint, hitting a drawing 8-iron from a perfect lie in a fairway bunker to 35 feet to set up an easy birdie and open a three-shot cushion. After a two-putt par on 17 and conservative bogey on the 72nd hole, he finished at 13-under 275, two shots clear of Justin Rose (70).

“It was going to happen,” Bubba Watson said of Woods’ reascension to the No. 1 spot. “He had injuries. He’s had a lot of things going on in his life. But he’s the greatest golfer ever.”

But there was work to be done, of course, even after three victories last season. In the offseason Woods knew he needed to sharpen his scoring clubs – last year, he was 102nd or worse in greens in regulation from 75-100 yards, 100-125 yards and 125-150 yards. This year, he ranks no worse than 69th in those categories.

Woods had four eagles all of last year. This week alone, he made three.

And after a tip from Steve Stricker at Doral, Woods’ putter has also learned to cooperate in crunch time. He led the field in strokes gained-putting. Prior to Monday’s restart, he was 11 of 12 on attempts from 10 to 20 feet. Tweeted Paul Azinger, “Most pros won’t make 10 putts that long in a month.”

“He’s playing well,” Fowler said. “You know when another guy is playing well and he’s on top of his game, he’s got a little something.”

“He’s won three of his four stroke-play events here in the U.S.,” LaCava said. “If you’re paying attention, you probably have to look over your shoulder (now) a little bit, right?”

Inevitably, the conversation now shifts to the majors, as it always does with Woods. Perhaps it’s just a statistical anomaly, but in the three years that he has won three PGA Tour events before the Masters – in 2000, ’03 and ’08 – he has not gone on to wear the green jacket. In two of those three years, however, he went on to win majors. Talent triumphed.

Woods hasn’t won a major since 2008, the Masters since ’05. Until he wins major No. 15, until he resumes his ascent up Mount Nicklaus, questions will remain. That’s the gift and the curse of an in-form Tiger.

When asked the last time he felt this good heading into Augusta, Woods said flatly, “It’s been a few years.”

Indeed, everything about his game is starting to look like old times.