Finchem: Will continue to co-sanction Masters 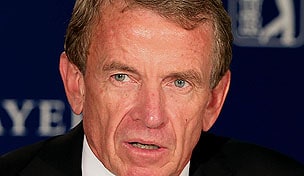 Getty Images
PONTE VEDRA BEACH, FL - MAY 09: PGA Tour Commissioner Tim Finchem speaks to the media during a press conference prior to the start of THE PLAYERS Championship held at THE PLAYERS Stadium course at TPC Sawgrass on May 9, 2012 in Ponte Vedra Beach, Florida. (Photo by David Cannon/Getty Images)  -

Finchem reiterated the Tour's position Wednesday on why it continues to co-sanction the first major of the year.

'In the case of the Masters, we have concluded a number of times now - and we have certainly not moved off of this - that we are not going to give up the Masters as a tournament on our Tour,' Finchem said in his annual news conference at The Players Championship. 'It's too important. And so at the end of the day, the membership of that club have to determine their membership. They are not doing anything illegal.'

Augusta National chairman Billy Payne was questioned in April during the Masters about the lack of a female member at the club, particularly in light of the appointment of Virginia Rometty as the first female CEO of tournament sponsor IBM. The last four CEOs of the company were offered membership to the club. Payne declined to comment on the subject.

Although Augusta National does not have a female member it does allow women to play at the club as a guest. Finchem said the access women have to the club is consistent with PGA Tour policy which requires host courses for co-sanctioned events to not actively discriminate on the basis of gender or race.

'I know some people don't like that position and I appreciate that and I understand their reasoning, but that's the decision we've made.'