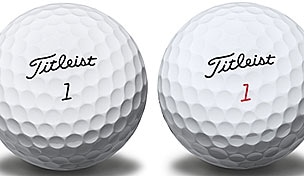 Getty Images
VIRGINIA WATER, ENGLAND - MAY 18: Padraig Harrington of Ireland checks the level of a green with caddy Ronan Flood during a practice round at Wentworth prior to the BMW PGA Championship on May 18, 2010 in Virginia Water, England. (Photo by Ross Kinnaird/Getty Images)  -

As popular and successful as the Pro V1 franchise has been, the folks at Titleist keep striving to make enhancements to their flagship golf ball line. And this winter’s rollout of the new 2013 Pro V1 and Pro V1x products is the latest example of that.

Let’s start with the Pro V1. According to Bill Morgan, senior vice president for golf ball research and development at Acushnet, the parent company of Titleist, the ball is the softest Pro V1 ever. That’s largely the result of a ZG process core technology that is designed to give the ball even better feel and control with shots into and around the greens.

Morgan said that technology also makes this iteration of Pro V1 longer than previous ones, adding that it is made to produce a lower, more controlled flight with lower driver and long-iron spin that result in a shallower angle of descent, for greater distance and more roll.

Another attribute of the 2013 Pro V1, he said, is its improved durability, thanks to a urethane elastomer cover formulation and new paint system that keeps the golf balls looking whiter and brighter longer.

As for the 2013 Pro V1x, it also boasts the enhanced cover formulation and paint system. And Morgan said it is designed to deliver even more distance than previous generations due to a lower, more consistent ball flight. Yet, it is made so that it continues to maintain a deep downrange peak trajectory.

The ZG process core technology helps to keep driver spin in the new Pro V1x low for better distance, while increasing iron spin for better control into greens. That feature is also intended to produce more consistent performance as a result of more consistent core hardness and concentricity.