Too limited? Viewers won't see much of Woods on Day 1 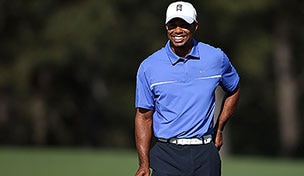 Getty Images
PEBBLE BEACH, CA - JUNE 19: Dustin Johnson walks with his caddie Bobby Brown on the ninth hole during the third round of the 110th U.S. Open at Pebble Beach Golf Links on June 19, 2010 in Pebble Beach, California. (Photo by Donald Miralle/Getty Images)  -

AUGUSTA, Ga. – Augusta National has always struggled with the concept of giving the viewer everything they want vs. leaving them wanting more.

This year is no exception.

Exhibit A: Tiger Woods is not listed as one of the Masters.com featured groups in Round 1, a decision that has many in social media circles up in arms.

It doesn’t seem to make sense that Joe Viewer won’t get to see the prohibitive favorite, the No. 1 player in the world and a man who has won three times this year begin his quest for a fifth green jacket.

Woods is in a featured group on Friday, but most of that round will be televised. Only the last couple holes of Woods’ opening round will sneak into the TV window on Thursday.

“You can’t be in a featured group both days,” Augusta National chairman Billy Payne said Wednesday.

“I think it’s fair to say that one of the tenets that we hold to most dearly is that, it is limited,” Payne said. “And I think because it is, it makes it a little more special.”

There are plenty who disagree with that notion.