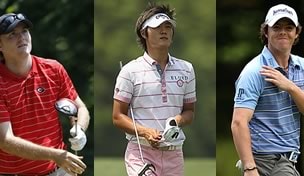 Getty Images
CANONSBURG, PA - SEPTEMBER 02: Martin FLores watches his tee shot on the eighth hole during the first round of the Mylan Classic presented by CONSOL Energy at Southpointe Golf Club on September 2, 2010 in Canonsburg, Pennsilvania. (Photo by Gregory Shamus/Getty Images)  -

The young guns are coming.

In what was seemingly a weekly occurrence last year, some long-hitting kid with peachfuzz on his face and a library card in his wallet would stand toe-to-toe with the world’s best golfers.

The result would be a worldwide Battle of the Superlatives, with every observer spraining his thesaurus trying to put the youngster’s accomplishment into the proper perspective.

Until the next tournament, that is, when another young player would step forth and be noticed, only to be offered similar superlatives.

And for good reason. The current crop of players under 25 includes a U.S. Open champion (Rory McIlroy), a two-time major championship runner-up (Jason Day), a two-time European Tour winner as a teenager (Matteo Manassero), a global icon (Ryo Ishikawa) and a trendsetter (Rickie Fowler), to name a few.

There’s a virtual cornucopia of brilliant young talent in the golf world today, perhaps more than at any other point in decades. So what did we decide to do? Rank ‘em. That’s right. You’re about to click through a listing of the top 25 players under the age of 25.

If it sounds like a difficult proposition, you’re right. But we did it anyway.

Two things to know: First, the list is totally subjective. Is Sunghoon Kang really better than Oliver Fisher? That’s almost impossible to determine … but we still tried. Second, the list is completely fluid. Should Tommy Fleetwood have jumped into the mix following his strong season debut last week? Maybe, maybe not. The only thing certain is that whatever the list looks like this week, it will likely look much different a year from now, a month from now, or even a week from now.

With that in mind, here is GolfChannel.com’s Top 25 Under 25 in the current men’s game. You’ll know plenty of the names. Those you don’t know, remember. Because all 25 of ‘em have very bright futures in the game.

Photo gallery: Top 25 players under the age of 25

The following list includes those who just missed cracking the top 25: