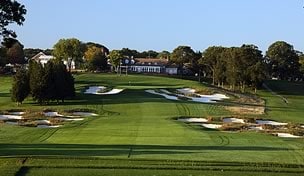 One course for the rest of your life?

Don’t worry, it gives even the greats of the game a slight pause. I recently asked Ben Crenshaw that question and he said Old Course at St. Andrews. Difficult to argue with someone as thoughtful and knowledgeable as Gentle Ben.

But as that question pertains to the U.S., I start at Bethpage Black and work backward. The mother of all munis has hosted two U.S. Opens (2002 and 2009), but that’s not why it’s my favorite. The Black is the perfect combination of all that I look for in a golf course: it has history and character; it is walking only; caters to locals with an affordable rate; it’s challenging but fair; there are memorable holes with a climactic finish; and as soon as you walk off the 18th green you wish you could go back to the first tee.

I’m certainly not a geek about course architecture or architects, but the more I play, and the more I learn about the course builders, the more I appreciate the finer points of design. The way the holes look from the tees, the positioning of bunkers, the sizes and contours of greens all play a factor into how and why a course ranks on my list. Having spent significant time with Bill Coore as he begins building Cabot Cliffs in Nova Scotia, I’m a big fan of his work. But this list is about a spiritual connection to the courses, not the people responsible for building them.

Any one of my top 10 – or top 20 for that matter – are all must-play courses. This whole exercise of putting a number to each is like picking a date within a circle of swimsuit models. As I said on 'Morning Drive' I like making lists as much as I like talking about them. That’s what avid golfers do. Courses like Ocean at Kiawah, Sawgrass, and Whistling Straits – all built by Pete Dye – don’t rank as high on my list as they do on many others. That’s because, when put to the question – one course for the rest of your life? – they come closer to the category of “unfair for the avid amateur,” than they do “challenging.” It’s a fine line in a deep bunker of debate, and Pete Dye has never been afraid to push you in and over it. Remember, the Marquis de Sod is thinking more about protecting par against the professionals. The avid amateurs – I’m an 8 handicap – are left to pay the big green fee, lose three sleeves of balls, shoot at least 10 more than their handicap, and like it.

So, without further ado, this is the course I’d play for the rest of my life. And if Bethpage Black wasn’t available, I’d play Pacific Dunes. How’s Pebble Beach for a third option?

I rank Pete Dye’s Straits ahead of Harbour Town and the Ocean Course at Kiawah because, when the wind isn’t whipping off Lake Michigan, this arresting architecture can be fair off the tee, and can actually be considered … fun! (Don’t tell Dye.) I like the par 3s and appreciate the manufactured “linksland,” but I ding it for the green fee ($360 plus $60 for a mandatory caddie). Come on, Mr. Kohler, love the flock of Scottish Blackface Sheep, but you can't fool me, this is still just a trip to Wisconsin.

Being in the middle of Michigan doesn’t help one of Weiskopf’s best get a lot of green fees, but for the avid golfers who make the trek, you will not be disappointed. New owners have built a 14-room lodge – opening this spring – which will be a big help. And if the course is in the impeccable shape it was in when I came through town, then the weekend peak-season rate of $149 can be considered a sweet deal.

My advice on golf at Bandon Dunes? Play your rounds at sunrise, and time your afternoon rounds so you’re finishing at sunset. And a few of those afternoon rounds should be at Bandon Dunes, which has some finishing holes along the water. I spent a lot of time reflecting on the 16th tee, the 16th green and the 17th tee. If slow play is an issue in golf, that stretch of holes doesn’t help. All four Bandon courses are $235 in peak season (May 1-Oct. 27) and $75 in the off-season (Nov. 25-Jan. 31).

When asked, how would you break up 10 rounds at Bandon Dunes Resort, I always answer: I’d play three rounds at Pacific, three at Bandon, three at Trails and one at Old Mac. Trails is that good. And for those who skip it because you’ve come to the southwest coast of Oregon to play golf along the coastline, you’re making a big mistake. Big. Huge.

Spyglass is as tough as the Ocean Course at Kiawah, but it’s fair. After playing Pebble in the morning and Spyglass in the afternoon – one of the ultimate doubles in golf – I argued Spyglass, going hole-by-hole, might be a better course. Now up to $400 on weekends, it costs almost as much as Pebble, which tempers a touch of my enthusiasm.

You won’t find Pasatiempo as high as No. 5 on most lists like this, but getting back to the question of one course for the rest of my life? I’d be more than happy hanging out at the place Mackenzie called home when he died. Tom Doak brought one of Mackenzie’s masterpieces back to prominence after a 10-year restoration. You can play it for $250 and a $110 replay rate (which includes cart). I would never go there without trying to squeeze in 36.

What has always been a special experience – to walk the hallowed fairways and to putt the domed greens built by Donald Ross – only got better after a recent restoration by Bill Coore and Ben Crenshaw. They lit the place up and defined the fairways by exposing the natural waste areas that have become a unique brand of white and wispy rough. Is it worth $410? No. But management tells me only 2 percent actually pay the walk-up rate. The masses book stay-and-play packages, which usually include the Carolina Hotel and one of the best breakfast buffets in the country.

I know, I’m nuts to have this icon anywhere but No. 1. To be honest, I’ve had it has low as No. 9 on my list. Why? When you’re charged $495 for a round (once-in-a-lifetime for most) it only seems fair that it comes with an elevated set of expectations. But when those expectations are met with being treated like meat, a bad caddie, greens that aren’t in great shape and delivery trucks literally back up over your round, you can’t help but punish even the Pebbles of the world. Sure, it has seven of the greatest holes in golf – Nos. 6-10, 17 and 18 – but I think the other holes are overrated, and the manufactured underbelly of the 18th tee, created because of the deteriorated coastline, has never looked right to me.

It took me a few years, but I finally figured out a definitive reason why I like Pacific Dunes better than the other courses at Bandon Dunes: Tom Doak made the best use of the coastline. (See holes 4, 10, 11, and 13.) The seventh hole, with the tucked and tiny green, might be the most underrated par 4 on property. I don’t love the first two holes, and never loved the finishing hole, but the 18th was drastically improved after a recent tweak, which opened up the approach to the green and a view of the clubhouse. At $235 during peak season (May 1-Oct. 27) and $75 during the offseason (Nov. 25-Feb. 1), Pacific is great value and the best links golf experience in America.

Having lived in New York for 17 years, I played the Black before and after the restoration in the late-‘90s. I can remember paying $20something, and a few months before I left for Orlando, I paid $65 during the week. It’s walking only, and the twists, turns and various elevation changes of the routing only enhance the hike through this spacious state park. If I go back, as an out-of-state resident, I’ll pay $130 on weekdays and $150 on weekends. Still insane value. The fact that even out-of-staters can play Black almost four times for every round at Pebble makes this my favorite. Homer, you say? Maybe. But it’s not my home anymore. And I can confess, I miss it. Even the hulk that is the 15th hole.