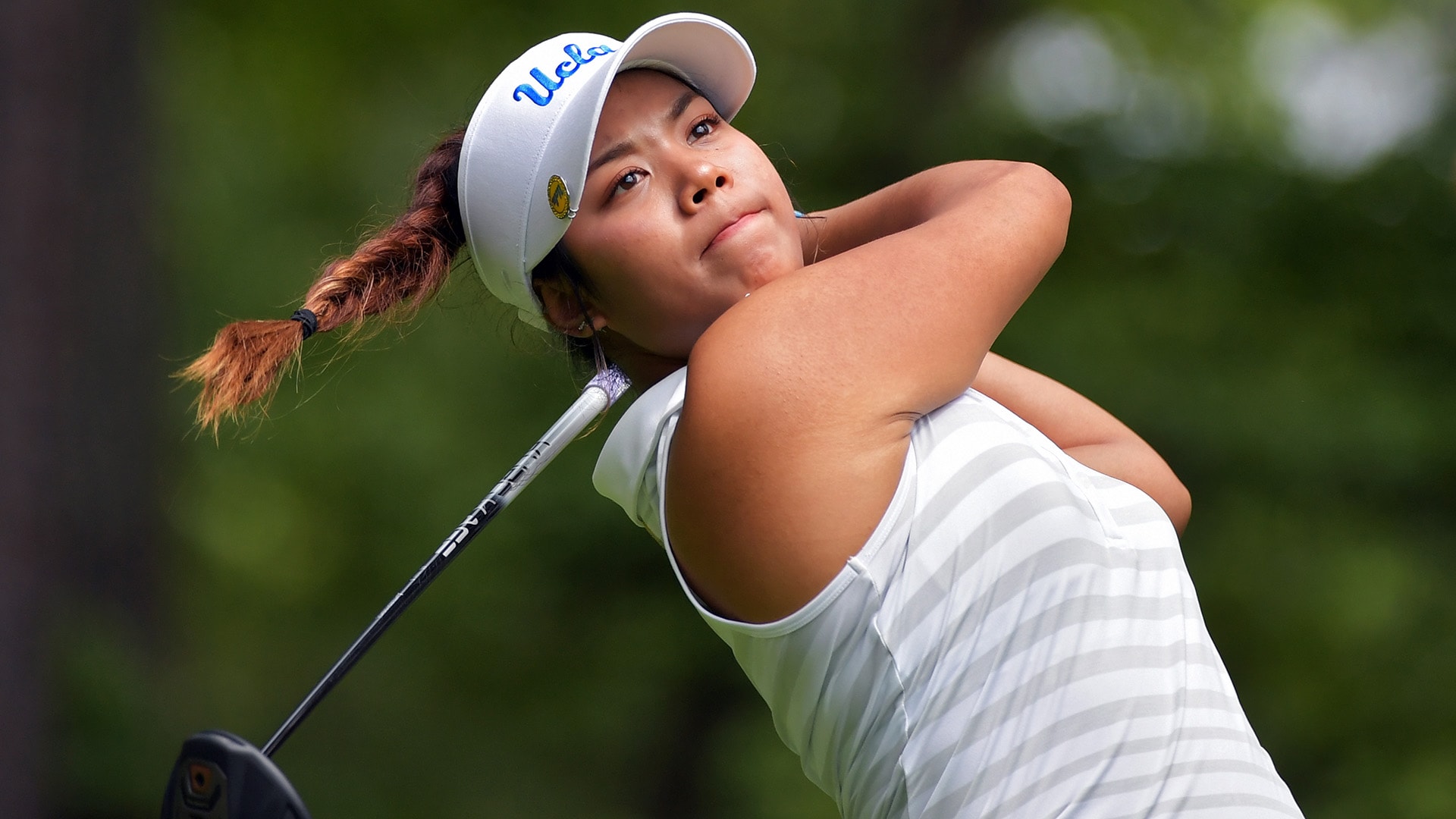 The LPGA’s new Q-Series comes with changes that were designed to make it easier on college coaches who watched the traditional Q-School format devastate their rosters in the middle of their school year.

“There’s a lot about this that isn’t easy for those of us going through it, who don’t know what our team is going to look like when spring comes around,” Forsyth said.

They coach the top two women’s programs in the country, with Alabama No. 1 in the Women’s Golf Coaches Association Poll and UCLA No. 2.

They can’t help feeling like the Q-Series comes with changes that may be hardest on the best collegiate programs.

The first shot in the inaugural Q-Series won’t be struck until Wednesday morning at Pinehurst, but Alabama and UCLA have already been negatively impacted by the sweeping changes made to the final stage of the LPGA’s qualifying tournament.

• Non-members among the top 75 in the Rolex Women’s World Rankings.

• The top five women from the Golfweek/Sagarin College Rankings.

• Forty players advancing from Stage 2 of the LPGA qualifying tournament.

The top 45 and ties at the conclusion of Q-Series will earn LPGA tour cards and play out of Category 14 in the tour’s 2019 priority rankings, based on their finishes.

Basically, the Q-Series brings three changes that concern the coaches of the top two programs in the land:

1. The exemption for the top five women from the Golfweek/Sagarin College Rankings, which allows those players to bypass first- and second-stage qualifying, entices underclassmen and most threatens the top college programs with roster disruption.

2. A deferral now granted collegians who win tour cards, allowing them to take up LPGA membership after they graduate in the spring, may not help as much as intended. While the deferral was intended to help college coaches, giving their players a chance finish out the spring, it may serve to entice top underclassmen to leave school earlier than they planned.

3. The Q-Series, conducted over two weeks, will be played more than a month earlier than the final stage of Q-School was traditionally played, and that is interfering with fall collegiate tournaments.

Alabama and UCLA look as if they could be hurt most by the top-five exemption.

Two of UCLA’s stars, Patty Tavatanakit and Lilia Vu, were among the top five collegians exempted to Q-Series.

Two of Alabama’s top stars are also at Q-Series. Lauren Stephenson made it off the top-five exemption list, and Kristen Gillman, her teammate, made it by advancing through the second stage of the LPGA qualifying tournament.

Tavatanakit is a sophomore whose LPGA ambitions were sped up by earning the exemption. Vu is a senior.

“I have pretty high expectations that both of my players are good enough to make it through the Q-Series, and the chances are they won’t be with us in the spring,” Forsyth said. “But you never know.”

Forsyth, however, knows the powerful lure that Vu will face if she wins LPGA membership.

“In my experience, things change when players are actually in that situation, when they’ve made it all the way through LPGA qualifying,” Forsyth said. “They are compelled by that feeling that they have to be out there playing the LPGA, that they’re missing out if they aren’t. They feel like they have to play in these events so they don’t get bumped down in the reshuffle.”

Plus, Forsyth knows there will be mounting pressure from outside forces once a card is offered.

Potter has talked to Gillman and Stephenson about their Alabama plans, but he also knows what the lure of a tour card will do to a player. He is proceeding as if Stephenson and Gillman aren’t on the team.

“I have five girls on my team right now that want to play college golf, and my soul dedication is to them,” Potter said. “If Kristen or Lauren come back, if they indicate they want to be part of the team, I’ll discuss them, but right now they’ve chosen not to play two tournaments for us this fall. That’s what a full scholarship, to me, would imply, that you play for the team.”

Like Forsyth, Potter believes most players won’t take advantage of the new membership deferral the LPGA is offering. It would put them at too large a disadvantage when it comes to their new professional career. By staying in school, players would miss a substantial portion of the LPGA season, making it harder for them to retain their status for the following year.

“You can say now that you’re going to defer, but they can’t defer,” Potter said. “They know they’re going to be losing an opportunity, that it’s going to be hard for them to keep their card if they miss those tournaments at the beginning of the year. They want to keep that card.”

Potter doesn’t like the exemption for a top-five player, especially for underclassmen.

“What’s that exemption saying to us in the college game?” Potter said. “It’s saying, `We don’t really want anybody but your best players, and we’re going to give them the best chance, no matter what year in school they are.'”

If those top players all leave Alabama and UCLA, it will seriously hinder those programs’ chances for NCAA titles in the spring.

It’s actually hurting both programs this fall. Tavatanakit and Vu both missed a UCLA event this fall preparing for Q-Series.

“In the past, the final stage of LPGA Q-School was in December,” Forsyth said. “The dates allowed us to at least complete our fall season. This is all coming in the middle of our season. It’s something we just have to deal with.”

Potter was also frustrated by Q-Series move into the fall collegiate calendar.

“There was no consideration for our scheduling,” Potter said.

The Q-Series may end up leading to fewer college players enrolling in the LPGA’s first stage of the qualifying tournament, with the road to the LPGA longer and harder and more expensive now. It may lead to more collegians aiming to focus on the Symetra Tour as the start to their pro careers. Potter and Forsyth are waiting to see how that actually plays out.

While these top college coaches know the new LPGA deferral may help them in the spring, they don’t like the havoc Q-Series is already bringing to the fall. They don’t like knowing how much worse the spring may be.

They both believe in the student-athlete model, in the promises inherent in a college scholarship and in the importance of the collegiate experience and a college education.

“Everybody is going to say 'You’re being selfish,'" Potter said. “Yeah, we want to have a good team. That’s my job. I just don’t think this is good for the game.”

The field is now set for the NCAA Women’s Championship. Here's what You Oughta Know about the NCAA women's regionals.

The NCAA Division I women’s regionals got underway this week at three sites across the country. Here are the final results.