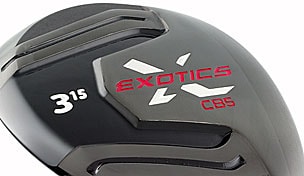 Tour Edge introduced its Exotics CB fairway metals in the fall of 2006, and it didn’t take long for touring professionals to begin putting clubs from that series into their bags. During the 2011 and 2012 seasons, for example, a number of players relied on what was then the latest iteration of that line, the CB4, when they teed it up in competition, among them Matt Kuchar, Brian Gay and Kevin Streelman.

In fact, Brandt Snedeker was using a CB4 metal when he captured the FedEx Cup in 2012 – even though he was not a paid Tour Edge endorser – and was still playing one when he got off to his fast start this year, winning once and finishing second twice in his first five tournaments of 2013.

As happy as Tour Edge engineers said they are with the success of the CB4, they insisted this is no time to rest on their laurels. So, they brought out the CB5 at this year’s PGA Merchandise Show.

Like earlier series offerings, the CB5 is designed for better players. The company uses what officials describe as “no-weld technology” to “combo-braze” a beta-titanium cupped face with a heavier hyper-steel body. As a result, they said they have eliminated every single gram of excess weight from the face and shifted it to the rear skirt and sole for a deeper center of gravity. That is designed to give the club a deep, high center of gravity, and by extension, a more explosive and penetrating launch angle.

In addition, Tour Edge technicians said that the CB5’s swept wing moves weight to the heel and toe for a larger sweet spot. And it employs the CB4’s trampoline-face design that combines multiple levels of face thickness and encourages a powerful rebound effect.