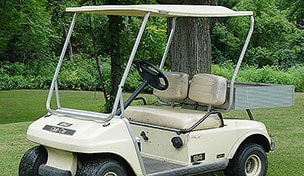 What should’ve been a trip for two New England tourists to the “Happiest Place on Earth” turned out to be anything but this past weekend at Disney’s Epcot theme park, after authorities say they stole a golf cart and took it for a joyride.

Micheal Kulesza and Donald Rossi are accused of stealing the golf cart and eyewitnesses said the two men could be seen yelling, shouting and laughing as they drove it on a boardwalk, reportedly almost flipping it over.

The duo was eventually stopped by police and arrested on charges of grand theft. They have since been released on bond.

As boneheaded as this may seem, it could be worse. At least they weren't this guy: