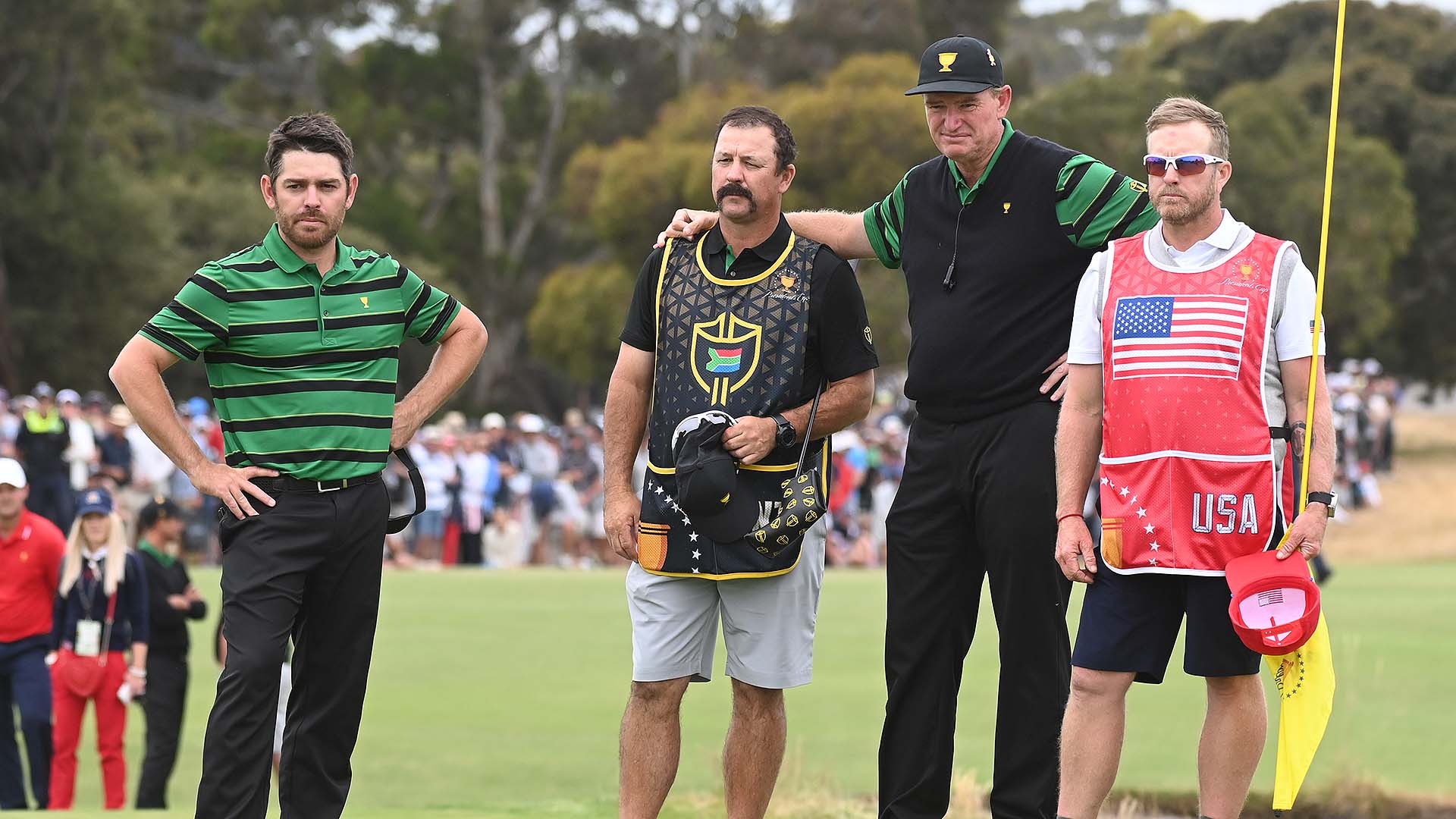 MELBOURNE, Australia - Ernie Els has finished second to Tiger Woods more than any other player, and he never looked more spectacular doing it than as captain in the Presidents Cup.

''OK, you got me,'' Els said to him with a wry grin during the closing ceremony at Royal Melbourne.

Was it really a surprise?

Even with a 10-8 lead going into singles, Els and his International team were playing against a stacked deck, as usual.

It wasn't as bad as the time Els trailed Woods by 10 shots going into the final round at Pebble Beach in the U.S. Open. Still, it didn't seem like a fair fight.

The Internationals had only two players among the top 20 in the world ranking. Woods' team had 10 players from the top 20, and that didn't even include the injured Brooks Koepka at No. 1 in the world. Two of the four wild-card selections for the Americans, including Woods, won majors this year. In the singles session, the outcome felt inevitable.

Els was gracious in defeat, and also gutted.

He had fashioned 12 players representing nine flags into a team with identity and purpose. The logo he created for the International team was a combination of shields and badges culled from history that spoke to unity and loyalty, friendship, strength and fight. And they had a chance, which is more than they've had some years.

''If you compare our team on paper with other teams in other sport, you would have laughed us out of the building,'' Els said. ''But we gave it a hell of a go and we came mightily close to winning and upsetting one of the greatest golf teams of all time.''

And it won't get any easier the next time. Or the time after that.

This is about more than world rankings and experience, about which team looks better on paper. Because if it were, then how to explain the Ryder Cup? Europe is strong now. It wasn't always. It still has an 11-8-1 lead over the United States dating to 1979, the start of the modern era.

But while the Ryder Cup is billed as a contest between the flags of two continents, it's really between two tours.

The European Tour picks the venue (it usually goes to the highest bidder these days). It has full control of all operations. Paris last year felt like a home game - the course, not just the crowd - just as Hazeltine was for the Americans.

The Presidents Cup is a match between two teams, one owner.

The PGA Tour selects the site. The PGA Tour picks the captains, though not without heavy input from all the key people on the International side.

The money - the Presidents Cup sells extremely well - stays with one organization every time.

That's not why the Americans win, and Els wasn't suggesting that. They win because they play better golf and hole more putts. There is a comfort level at the Presidents Cup they don't experience in the Ryder Cup.

Nothing personal. He paused to pat the back of Mark Williams, who played professionally in Australia and now works as a media official for the PGA Tour. Last week, he was assigned to the International team and fit right in.

''I love these guys. They work for the tour and all that,'' Els said. ''But to make our own rules, to get our own choices, to do our own thing, it's hard to explain. But we need to be separate. ... The Ryder Cup works because the Europeans do their own thing and the U.S. do their own thing. It's two groups that clash. We're trying to do it under one umbrella.''

The next Presidents Cup will be at Quail Hollow Club in North Carolina, a home game for the U.S. team. And then? A group from Thailand was at Royal Melbourne last week expressing interest. The best bet is a return to Royal Montreal. Another one in Asia or the first one in a Latin America country is possible after that.

It would help if the Internationals would win. Keeping it close only does so much. If they ever do, that might only remind Els of the one problem that can't be solved.

Where would the International team display the trophy?