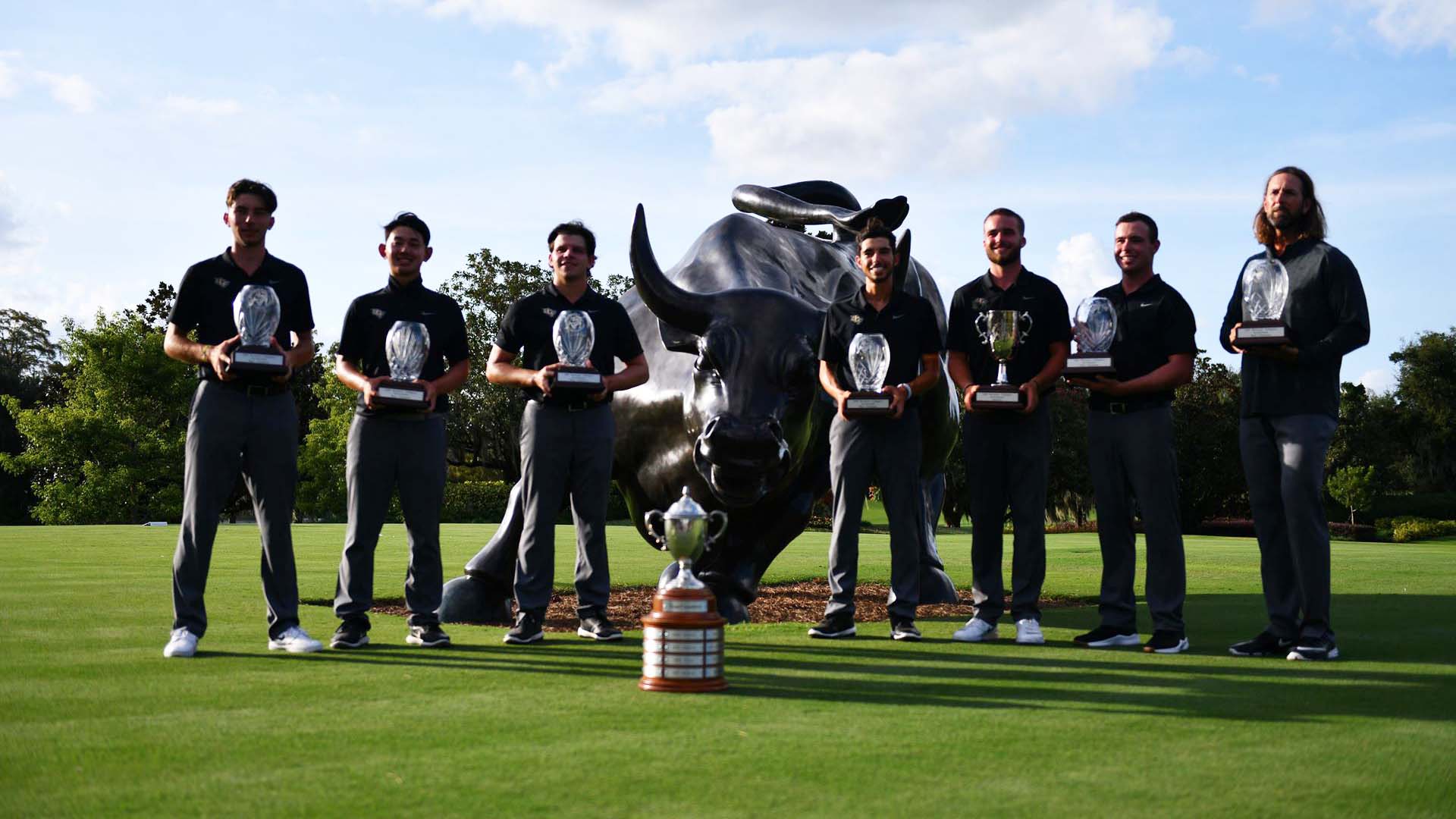 WINDERMERE, Fla. – UCF men’s coach Bryce Wallor crunched the numbers Monday evening before Tuesday’s final round of the Tavistock Collegiate Invitational and was blown away by his team’s performance on the greens.

The four counting Knights holed more than 800 feet of putts in Round 2 as UCF, the No. 72-ranked team in Golfstat entering the week, led a star-studded field by 17 shots through two rounds at Isleworth.

“Out of this world,” Wallor said. “… Those putters were red hot.”

Not even a fiery Isleworth, some diabolical pins and a challenging pack that included undefeated Texas Tech could cool off the Knights. UCF closed in 1 over Tuesday, but it was more than enough to win by 14 shots over runner-up LSU. The victory marked the first for UCF at its home tournament.

The Knights, who finished at 20 under and led the field with 57 birdies, were led by sophomore Johnny Travale, who carded seven of his tournament-leading 17 birdies in a final-round, 6-under 66. He needed to make a 5-footer for bogey at the par-4 finishing hole Tuesday to finish at 12 under, a shot clear of LSU’s Trey Winstead.

Wallor called Travale, who transferred from Kent State this year, a “game-changer for our program” and said the sophomore is a mainstay at the team’s practice facility at Twin Rivers Golf Club in nearby Oviedo. “He’s always there,” Wallor said. For Travale, he’s just enjoying the practice-friendly weather.

“I’m really happy where I’m at,” said Travale, who was joined in the top 10 at Tavistock by fellow sophomore Clement Charmasson, who tied for seventh.

The Knights are glad to be back in the Sunshine State, as well. UCF played its first three events of the fall in Michigan, Connecticut and Nebraska, winning just one of them.

Tuesday’s victory wasn’t just the biggest win of the young season, it arguably was the most notable regular-season title in school history.

UCF was 19 shots better than Vanderbilt, 20 clear of Texas Tech, 22 ahead of eighth-ranked Arizona State and 27 lower than preseason No. 1 Texas.

“This was a big one for our guys,” said Wallor, whose team will close the fall next week at the AAC’s preview tournament at Innisbrook. “We’re a very young team. … I think when they came in here this week, they looked around and a few guys commented, ‘I never beat that guy in junior golf,’ and they have now, so they’re going to build some confidence from this. They know they can do it, and we’re just going to go out and get to work.”