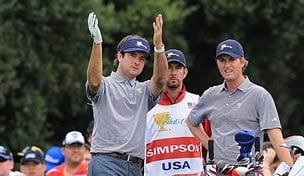 MARANA, Ariz. – The artistic, majestic wedge out of the trees and onto the 10th green at Augusta National. The tearful celebration. Slipping into that beautiful green jacket for the first time in Butler Cabin. The trophy presentation.

Bubba Watson finally had a chance to catch his breath when he sat down for dinner to honor the latest Masters champion.

And that's when it hit him.

''We're all upstairs at the dinner and he said, 'Dude, do you realize what this means?''' caddie Ted Scott recalled. ''And we're thinking, 'Yeah, Bubba. You're The Masters champion. This is a pretty big deal.' He stops dead in his tracks and he says, 'I've got to buy Paul that ring.' ''

Paul Tesori, the caddie for Webb Simpson, was listening to the playoff on the radio while driving home to Florida when Watson made his incredible escape and beat Louis Oosthuizen with a par. Tesori smiled when he thought about the ring and wondered if Watson even remembered his promise.

Leave it to Watson to have instant recall of such an insignificant moment compared with the magnitude of winning the Masters.

There are 350 varieties of more than 80,000 plants at Augusta National, but only one palm tree on the golf course. It now takes on new meaning for Watson, a reminder of how he ruined a caddie's bet with his wife over a wedding ring and made up for it by winning a green jacket.

It all started when Simpson had an extra ticket for the practice round that he gave to Tesori's wife, Michelle. Tesori was so excited about her first trip to the Masters that, as they drove to Augusta and he raved about the beauty of the golf course, he served up a challenge.

''I said, 'Honey, one of the cool things is that there's one palm tree on the property and half the players don't even know where it is. If you can find the palm tree, anything you want is yours,''' Tesori said.

She had been asking about a diamond ring that cost $10,000 and would complete her wedding band. Tesori figured he would buy it whenever Simpson won his next golf tournament, but he got caught up in the moment and offered that as the reward.

They played nine holes that Wednesday with the regular group – Watson, Simpson and Rickie Fowler. Jason Day joined them on the first tee, but his wrist was a little sore and so the Australian left them after three holes.

The lone palm at Augusta is tucked away to the right of the green on the par-3 fourth hole. This was the big moment.

And that's when Tesori made his first big mistake.

''Paul was talking to Bubba about it and I'm thinking to myself, 'This is not a good idea,''' Simpson said.

Sure enough, Watson had no clue about the only palm at Augusta National. And when he heard the deal Tesori had with his wife, Watson couldn't help himself.

''My best recollection is Bubba being his normal self and throwing Paul under the bus,'' Fowler said. ''There are certain secrets Bubba can keep if they need to be kept secret. But if it's something along the lines of a bet, and nothing that can hurt you too bad – like a $10,000 ring – that's out the door.''

Watson found the palm and began making a scene, his voice getting louder as he pointed to the tree.

Tesori urged him to keep it down, which only egged on Watson, who continued to raise his voice and point to the palm. Tesori's only hope was that his wife was far enough back in the crowd and couldn't see – or hear – what Watson was doing. But when the caddie reached the green and looked to the left, he was doomed.

''I found my wife in the crowd,'' he said. ''She's got her arms up in the air in a V formation, jumping up and down. And Bubba thinks it's the greatest thing in the world.''

In some respects, it was like the Old Testament story of Samson offering to buy linen garments and a set of clothes for his 30 wedding guests if they could solve his riddle. The guests pressured his wife to get the answer, and they solved it on the last night of the wedding feast. Samson was so angry he killed 30 men and took their garments to pay off the bet.

This was just a ring.

And the man who ruined it all was the first to come to the rescue.

Tesori was thrilled for Watson when the Masters ended that night – and so was his wife.

''She said I should send him a text,'' Tesori said. ''I said, no, I don't want to do that. He's not going to remember, and I would never even bring it up. I'm rooting for Bubba because he's a friend of mine.''

The next morning, he received a direct message on Twitter from Scott, who was with Watson during the hours after his Masters win. He told him about Watson's reaction that Sunday night when he remembered the ring.

''The look on Bubba's face was about the same look as Paul's face when she saw the tree,'' Scott said.

Watson never thought twice about his end of the bargain.

Even better, when Michelle Tesori went to the jewelry store and told the story, the owner knocked 25 percent off the price.

It's just a coincidence, but in the months after that practice round, Watson had a green jacket, Fowler won his first PGA Tour event at Quail Hollow, and Simpson followed with his first major championship at the U.S. Open. Too bad Day, the other player in their group, left early.

''It was a cool experience,'' Fowler said. ''For the three of us, we have that memory to look back on with that ring, because all three of us ended up having a pretty good year. That ring symbolizes something.''