College and pro golf? It's possible 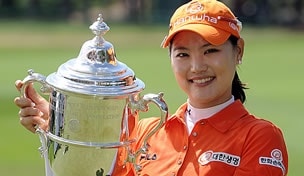 She knows the struggle Michelle Wie faced trying to balance college and a professional golf career.

So Yeon Ryu won the U.S. Women’s Open last summer while enrolled at Yonsei University in Seoul, South Korea. Ryu is still juggling academic and competitive interests as a senior at Yonsei this year.

She knows how important winning the Louise Suggs LPGA Rookie of the Year award is to Lexi Thompson this year.

Ryu, 21, covets winning the award just as much. She leads Thompson in the rookie race.

If Ryu can pull off the impressive double play, winning both a major and the rookie-of-the-year award while still in college, it ought to rank among the game’s terrific feats. Ryu ratcheted up her run with a hard climb onto the leaderboard Friday at the Mobile Bay LPGA Classic. She moved one shot off the lead going into the weekend.

Ryu’s double-play quest isn’t getting a lot of attention yet, but it should. She’ll be something of a Superwoman if she gets her degree next March with a U.S. Women’s Open trophy and rookie-of-the-year award already in hand.

In a telephone interview with GolfChannel.com, Ryu said the juggling act is challenging.

“Sometimes, it’s stressful, because I’m studying hard, and we’re always traveling and packing and unpacking,” Ryu said. “Sometimes, I have to be more focused on my studies, and I can forget about my golf.”

You wouldn’t know it looking at her results. Ryu began her rookie campaign tying for second at the ISPS Handa Australian Women’s Open in February. She tied for fourth at last week’s Lotte Championship. She also finished fourth at the RR Donnelley LPGA Founders Cup. Those strong finishes have helped her rack up 283 Rookie of the Year points, nearly doubling the total of Thompson, who is second on the list.

Ryu travels with her mother, Kwang Ja Cho. Her father, Chang Ryu, remains back in South Korea, where he owns a golf simulation business.

After winning the U.S. Women’s Open at The Broadmoor last summer, Ryu had the option of immediately assuming LPGA membership. She needed time to sort out how she would balance school and long trips to the United States, so she deferred membership until this year.

Ryu is majoring in physical education. She still lives in Seoul and attends school there, so when she’s on the road competing in the United States, she takes homework with her. She also meets curriculum requirements online.

Asked if she appreciates what Wie accomplished gaining a degree at Stanford while playing professional golf, Ryu said she believes what Wie did was even more difficult than what she is doing.

“I think the demands of college are harder here in the United States,” Ryu said. “But I think the experience for Michelle, being able to graduate from Stanford while playing pro golf, she could pretty much accomplish anything.”

A big summer is ahead for Ryu. She will defend her U.S. Women’s Open title at Blackwolf Run in Kohler, Wis., July 5-8. Blackwolf Run is where Se Ri Pak broke through in 1998 to win her first major championship. Pak’s victory ignited interest in the game among young girls in South Korea.

“I’m definitely one of Se Ri’s kids,” Ryu said. “I took up golf on a Friday, and the next Monday, Se Ri won the U.S. Women’s Open. I was interested in the game because I wanted to hang out with my friends at the driving range. After Se Ri won, I really got interested in golf.”

When Ryu won the U.S. Women’s Open, she said she was inspired seeing Pak inside the ropes, following her and fellow countrywoman Hee Kyung Seo in the playoff.

“Se Ri was my hero, and I was shocked when I saw her out there,” Ryu said. “I felt like with my hero watching, I really wanted to play great.”

Ryu, a gold medal winner in the Asian Games of 2006, turned pro at 17. She was immediately a force on the Korean LPGA Tour, winning the first event she played, the Sports Seoul Open. She first met Pak playing when they were paired together in a KLPGA event two years ago.

After the round, Ryu said Pak encouraged her, told her she had what it takes to play the LPGA Tour.

“Se Ri’s given me good advice,” Ryu said. “She’s always told me to enjoy my golf. I think that’s the best advice.”

Ryu’s doing just that in her quest to win an impressive double play.