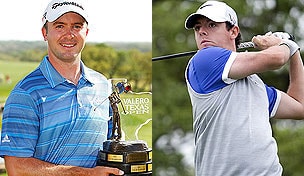 SAN ANTONIO – This sure beat a regular Sunday range session.

The wind howled at his back.

The beer-fueled fans provided the commentary.

And needing a bold shot into the par-3 16th at TPC San Antonio – where a deep bunker looms in the center of the green – Rory McIlroy seized the moment, a scene that was both refreshing and reminiscent.

With those highly scrutinized clubs – this one, an 8-iron – he ripped his tee shot into the clear blue sky. The ball settled 13 feet from the cup. The teeing ground shook.

When the birdie putt dropped, he punched the sky and acknowledged the delirious spectators, who only nine days ago learned that the world No. 2 would visit town. Imagine their delight.

That Martin Laird eventually prevailed Sunday at the Valero Texas Open mattered little, really. Sure, it was an important victory for the Scot – he came here with no top 30s in eight starts. But he simply caught fire Sunday, shot a course-record, 9-under 63, and won by two. The hottest putter almost always emerges on top.

“He was always just a little step ahead of me,” McIlroy said afterward, his final-round 66 leaving him solo second at 12-under 276. “It was tough to catch him.”

This victory, of course, earned Laird a return trip to Augusta, where McIlroy has had one eye all week.

After all, there were myriad reasons why McIlroy could have stayed home this week, why this last-minute decision was ill-conceived. Pick your favorite.

Getting into contention could fatigue him before the most exacting mental examination of the season.

Instead, McIlroy banked on the idea that competitive golf would supersede intensive practice. He was right – the Valero offered McIlroy a Masters preparation like no other.

“It doesn’t take long, just to turn it around and you’re off,” he said. “I guess I was more hopeful than expecting going into the last couple of tournaments. I think I know now where my game is at, and I’m happy with it. I’m really looking forward to next week.”

This wasn’t a week to work on technique. It’s why his swing coach, Michael Bannon, was home in South Florida with his family. It’s why his putting guru, Dave Stockton, checked in via text.

No, this was a week to get out on the course and play, to score, to put a card in his hand, hit the necessary shots, and see how he stacked up. Boarding the 6 p.m. flight without the winner’s cowboy boots in tow didn’t sour his outlook.

“The plan was to get myself tournament sharp, and I was able to do that,” he said. “It was a bonus that I got into contention and had a chance to win. I can’t really be too disappointed.”

It had been five months since McIlroy played like the world No. 2. What a majestic sight. On the par-5 finishing hole, and with the final result already determined, McIlroy pumped a 349-yard drive to set up a closing birdie. That shot – long, high and with a baby draw – will be his biggest advantage next week, with his brimming confidence a close second.

Overall, he ranked second in driving distance this week. He tied for first in greens hit, and he tied for 16th in approach distance, and he was 33rd in strokes gained-putting. All-around improvement.

Even driving accuracy, his worst statistic, was misleading. After finding 54 percent (30 of 56) of these fairways, lined with rocks and cactuses, then the tee shots at Augusta will seem like he’s letting it rip on a football field. Granted, a perfectly manicured one.

Sure, McIlroy’s game still was dogged by a few uncharacteristic mistakes.

On Thursday, he made three consecutive bogeys, each with a wedge in hand, to derail a good round.

On Saturday, he didn’t make a putt longer than 10 feet.

And on Sunday – when he began the final round four shots behind but quickly reduced the deficit – he will lament the birdie misses on Nos. 6 and 7, or the hooked drive on 10, or the misfired wedge on 17, when he needed to stuff it close and apply pressure.

But amid all this pedantry, let’s not forget: McIlroy lost only to a 63.

“I don’t think I have any complaints out there,” he said. “I just got beaten by the better guy on the day. … I didn’t quite get the win, but everything that I wanted to accomplish this week, I accomplished. I feel really good going into next week.”

At 23, he already has won majors both resting the week before (2011 U.S. Open) and playing his way into form ('12 PGA). If this portends Masters greatness, well, a more definitive answer will come in a week.

For now, we know that he finished second in a South Texas tournament that attracted 11 of the world’s top 50 players; an event with swirling winds and a quirky course; a final round in which the world No. 2 was clipped only by a slumping player who needed just 22 putts.

Do you believe again?

Because Rory McIlroy certainly does.