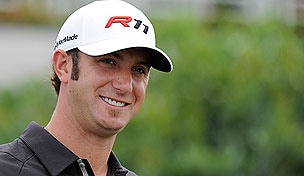 Try hitting onto a floating target from a moving boat on the River Thames in London.

That’s exactly what TaylorMade-adidas Golf staffers Dustin Johnson and Sergio Garcia did Monday in an unofficial kickoff to the 2012 Olympics. Golf, of course, will be included in the 2016 Games for the first time in more than 100 years.

“I think it’s going to be very special if I can represent my country,” Johnson told the Daily Mail. “Being an Olympian is more about being an athlete and being part of something more than just you.”

Johnson participated in a similar event in June, when he smashed drivers into McCovey Cove at the San Francisco Giants’ AT&T Park.

Check out the video from London below: