Singh offers no comment on deer-antler spray at Northern Trust 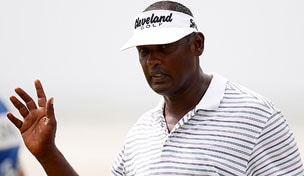 LOS ANGELES – Vijay Singh was in a business-as-usual mode making his way around Riviera Country Club Wednesday in the Northern Trust Open pro-am.

Singh is scheduled to tee it up Thursday for the second tournament since he admitted to taking deer-antler spray, which is reported to contain a banned substance, IGF-1. The PGA Tour is reviewing the matter and whether Singh should be suspended for violating the Tour’s drug policy by admitting to taking the substance. Singh tied for 50th at the AT&T Pebble Beach National pro-am.

Singh posted a 4-under-par 67 on his own ball in the pro-am at Riviera, a pretty good score on the day. Afterward, he signed autographs for a couple dozen fans who congregated along the ropes and posed for photographs.

Singh, who said in a statement that he was unaware deer-antler spray contained a banned substance, declined a request from a reporter to talk after his round and headed to the driving range to practice. Singh is scheduled to play the first two rounds with Geoff Ogilvy and George McNeill.