Unless you're one of golf's greatest players, which you're probably not.

But Phil Mickelson, who's the first reigning major champion to make a PGA Tour Champions start at the Constellation Furyk & Friends, is. And despite Lefty being tied for the lead after Day 1, on the par-5 13th, he showcased what makes his game special.

The 51-year-old six-time major champion "boomeranged" his shot perfectly from the deck of the woods, just as he did three weeks ago at the Fortinet Championship. Hey, practice makes perfect.

After his round, Mickelson downplayed the difficulty of the shot.

"Well, I had a tight lie in that sand so you could really spin it and I just took like a 2-wood or kind of a mini driver face so I could get a flatter face and get a lot more side spin," he said. "Honestly, it wasn't - it wasn't that hard of a shot because the lie was right. You just had to pull it off."

Mickelson's putt for birdie almost put a damper on the hole by doing a full 360 before falling in the cup. 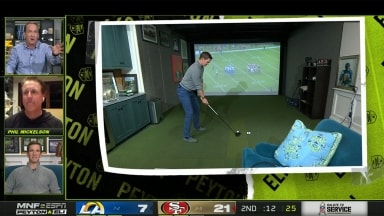