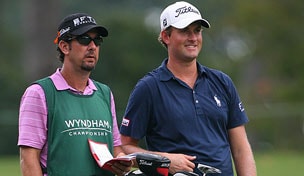 Getty Images
IRVING TX. - MAY 22: James Netties hits his approach shot into the 16th green during the second round of the HP Byron Nelson Championship held at the TPC Four Seasons Resort Las Colinas on May 22, 2009 in Irving, Texas (Photo by Marc Feldman/Getty Images)  -

Webb Simpson is at Kapalua this week with a new caddie.

No, the reigning U.S. Open champion hasn’t parted ways with Paul Tesori, one of the best loopers in the game. Tesori had shoulder surgery during the offseason and is not ready for the season-opening event.

Instead, Simpson has employed the services of Adam Hayes, who usually caddies for Jonathan Byrd, who will be sidelined until March because of left-wrist surgery.

Simpson tied for third last year in his first appearance at Kapalua, but he’ll be in good company with Hayes. Byrd has compiled a stellar record on the Plantation Course, winning in 2011 and finishing T-3 last year.