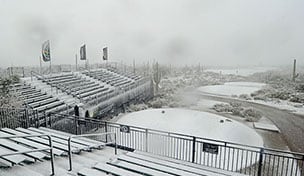 MARANA, Ariz. – So this is why Phil Mickelson skips the WGC-Accenture Match Play Championship.

Sure, it’s a good time for Mickelson to get away with the family after a hectic West Coast, not to mention the potential one-and-done nature of the event. But as a wet heavy snow blanketed The Ritz-Carlton Golf Club just before lunch on Wednesday, Mickelson’s brilliance descended on Dove Mountain like a winter storm. There are numerous things you can’t do in the snow, and playing golf would be atop that list.

Let this be where the conversation becomes serious: that it is time to leave Dove Mountain behind for greener, not to mention warmer, climes. For those who claim this view to be reactionary, we humbly submit the following exchange.

In the hours before the 2011 final between Luke Donald and Martin Kaymer about an inch of snow blanketed this slice of desert heartland, and briefly during the final turn the competitors and thin gallery encountered flurries.

OK, any other time?

Let the record show that not once while this event was played at La Costa Resort in Southern California, from 1999 to 2006, was a round impacted by snow. Torrential rains that flooded fairways and made holes unplayable, sure. But never snow.

Circumstantially, it should also be noted that in a 15-year career covering golf your scribe has been snowed on just three times while at an event. Two of those weather happenings occurred on this Arizona hill.

Wednesday’s white out, which arrived about an hour before the top-seeded players were to tee off and without a single match completed, was so surreal that it was actually the waiting that surprised players the most.

“I was surprised to hear the Tour say they wanted us to wait and see (if play would resume on Wednesday),” said defending champion Hunter Mahan, who was 4 up through nine holes against Matteo Manassero. “That was crazy.”

No, crazy is a 19-year Tour career that not once – not once – has featured a similar snow delay. In fact, Jim Furyk had to go all the way back to a 1984 high school tournament to remember the last time he’d played an event that had suffered a snow delay.

“There is a reason we don’t play in cold weather,” Furyk shrugged. “Follow the sun, isn’t that it?”

To be clear, Furyk, a player director on the Tour’s Policy Board, was not suggesting a change of venue for the Match Play, but his point is valid nonetheless.

And it’s not just unforgiving weather patterns that have plagued the WGC’s tenure atop Dove Mountain. Since 2007, when the Tour uprooted the Match Play from La Costa for the Tucson highlands, the galleries have been thin, the golf courses have been tolerated and the Sundays have been largely undistinguished.

It is time, as the great communicator Ronald Reagan once figured, the Tour votes with its feet and this was true long before Wednesday’s storm dumped 1 ½ inches of white stuff on the Jack Nicklaus design.

There is nothing wrong with the Match Play that a move to TPC Scottsdale couldn’t fix. Sure they have bad weather in Phoenix, but do you remember the delays or the gazillion fans surrounding the 16th hole?

Or, since the Tour seemed to misplace its globe when it conjured up the World Golf Championships – just one of the four WGCs are played outside the lower 48 – maybe it’s time to pull out the passports.

We hear Brazil is lovely this time of year.

If all this sounds like sour grapes frozen solid by Wednesday’s Nor’wester, consider one Tour member’s take this week when informed the press corps had a distaste for Dove Mountain. “So do the players,” he said.

Play will carry on Thursday, with officials planning to complete Round 1 and play catch up over the weekend. “I don't think we'll have any problem at all, if the weather remains nice, finishing Sunday on time,” Russell said.

And there seems to be no room for an immediate fix since the current Tour contract with Dove Mountain runs through the 2014 event, but if the seeds of serious discontent were not sown in Wednesday’s snow storm then they never will.

“Stay warm,” Steve Stricker’s caddie Jimmy Johnson told Henrik Stenson before the group teed off on Wednesday. Less than 15 minutes later the best Wednesday on Tour had been transformed into a winter wonderland.