What We Learned: Honda Classic 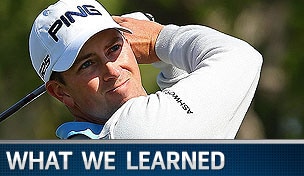 Getty Images
SHIMA, JAPAN - NOVEMBER 05: Ritsuko Ryu of Japan plays a shot on the 9th hole during round one of the Mizuno Classic at Kintetsu Kashikojima Country Club on November 5, 2010 in Shima, Japan. (Photo by Chung Sung-Jun/Getty Images)  -

Each week, GolfChannel.com offers thoughts on 'what we learned' from the world of golf. This week, our writers weigh in on the Michael Thompson's first career win at the Honda Classic, Rory McIlroy's wisdom tooth, some eye-popping yardage numbers and the international state of the game.

Apparently, too much is made of recent form. Prior to breaking through for his first career PGA Tour victory Sunday at the Honda Classic, Michael Thompson’s best result this season was a T-78. He had missed three of four cuts, picked up just one FedEx Cup point, earned barely more than $10,000. Prior to his runner-up finish at PGA National, Geoff Ogilvy had missed his last four cuts. He had failed to break 70 since Jan. 20, dropped out of the top 75 in the world, posted just six top 10s in his last 64 starts. Yet there they were Sunday, 1-2 on the leaderboard, standing tall on a course that punished the world’s best. Go figure. – Ryan Lavner

There’s worse pain than a toothache.

Rory McIlroy probably learned that, too, this past week at the Honda Classic.

Even Jack Nicklaus, who really likes McIlroy, didn’t like the fact that he walked off PGA National in the middle of the second round Friday, quitting on a game gone haywire and then later explaining that he couldn’t finish because of a painful wisdom tooth.

McIlroy was wrong to finish that way, but people who treat us right earn some leeway, they earn some slack. McIlroy is one of those people. He screwed up failing to finish, but he’ll come back and make it right. We want to believe that. – Randall Mell

If you don’t believe professional golf has become a power hitters’ ballgame, then check out the numbers from this past week’s European Tour’s inaugural Tshwane Open. Contested at the Els Club at the Copperleaf Golf & Country Estate in Centurion, South Africa, the course was the longest in history at 7,791 yards – and the winning score was still 21-under. But those numbers are nothing compared with some other ones. In fact, I’m not sure which is more amazing: That there were four par-5s measuring at least 597 yards or that each of these holes played to a scoring average well under par. That includes the record-setting 685-yard fourth, which sounds more like an airport runway. How long is it? Still 34 yards longer than Adrian Peterson’s rushing total over his final four games of 2012. And yet, it somehow yielded four eagles this week. Drive for show, putt for dough? That’s only half-right these days, as pros take healthy cuts with those oversized clubheads for plenty of cash, too. – Jason Sobel

The pendulum that is professional golf is firmly planted on the American side of the international ledger. Players from the United States have now won 11 consecutive official PGA Tour events dating back to last year’s McGladrey Classic and 12 of the last 14 starts . . . of course, one of those loses (Ryder Cup) will linger a bit longer than the others. – Rex Hoggard