What We Learned: Sony Open in Hawaii 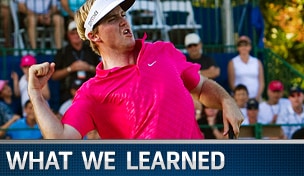 Each week, GolfChannel.com offers thoughts on 'what we learned' from the week. This week, our writers weigh in on Russell Henley's remarkable Sony Open in Hawaii win, changing expectations for PGA Tour rookies and whether Louis Oosthuizen is underrated.

The amazing rise of the rookies at the Sony Open is a game-changer for all of the young players on Tour. For whatever reason – emphasis on fitness, increased competition in junior and college golf, learning to win on the Web.com circuit – these talented 20-somethings now face an abbreviated learning curve on Tour. They emerge from college dorms and expect the penthouse, now. How, then, does this change our expectations for Luke Guthrie, Ben Kohles, Patrick Cantlay, Jordan Spieth and any other future fresh-out-of-college stars? For one thing, we won’t be surprised when they shine on the biggest stage. These kids are already ready to win. – Ryan Lavner

The PGA Tour could feel a lot younger on late Sunday afternoons this year. With rookie Russell Henley, 23, winning the Sony Open on Sunday, with rookie Scott Langley, 23, making a hard run before stumbling on the back nine, and with Dustin Johnson, 28, winning the season-opening Hyundai Tournament of Champions last week, this season opens with a decidedly youthful look. It’s an exciting early development. You couple it with Rory McIlroy, 23, rising to No. 1 last year, with Rickie Fowler, 24, breaking through to win at the Wells Fargo Championship, with Webb Simpson, 27, and Keegan Bradley, 26, joining McIlroy as major championship winners the last two seasons, and you see the game not so gently transitioning to a new era. – Randall Mell

Louis Oosthuizen would be the world’s most underrated golfer if he weren’t so highly rated. With his win at the Volvo Golf Champions, the South African moved to No. 4 on the Official World Golf Ranking, behind only Rory McIlroy, Tiger Woods and Luke Donald. And yet, in most conversations about the game’s best players he often gets overlooked in favor of guys like Lee Westwood, Adam Scott and Justin Rose – each of whom even the least astute observer knows hasn’t won a major. Oosthie? Of course he has. He’s also finished sixth or better in seven of his last eight starts. Still, it seems like we talk about his buttery swing only when he’s in contention. He’s the ultimate out-of-sight, out-of-mind golfer. Maybe that’s because he isn’t flashy. I mean, this is a guy who won a car this week and traded it in for an excavator to remove some stumps from his farm. Can’t see Rory, Tiger or Luke doing that. Farming talents notwithstanding, though, whenever we talk about those three these days, Oosthuizen deserves to be included in the conversation, too. – Jason Sobel