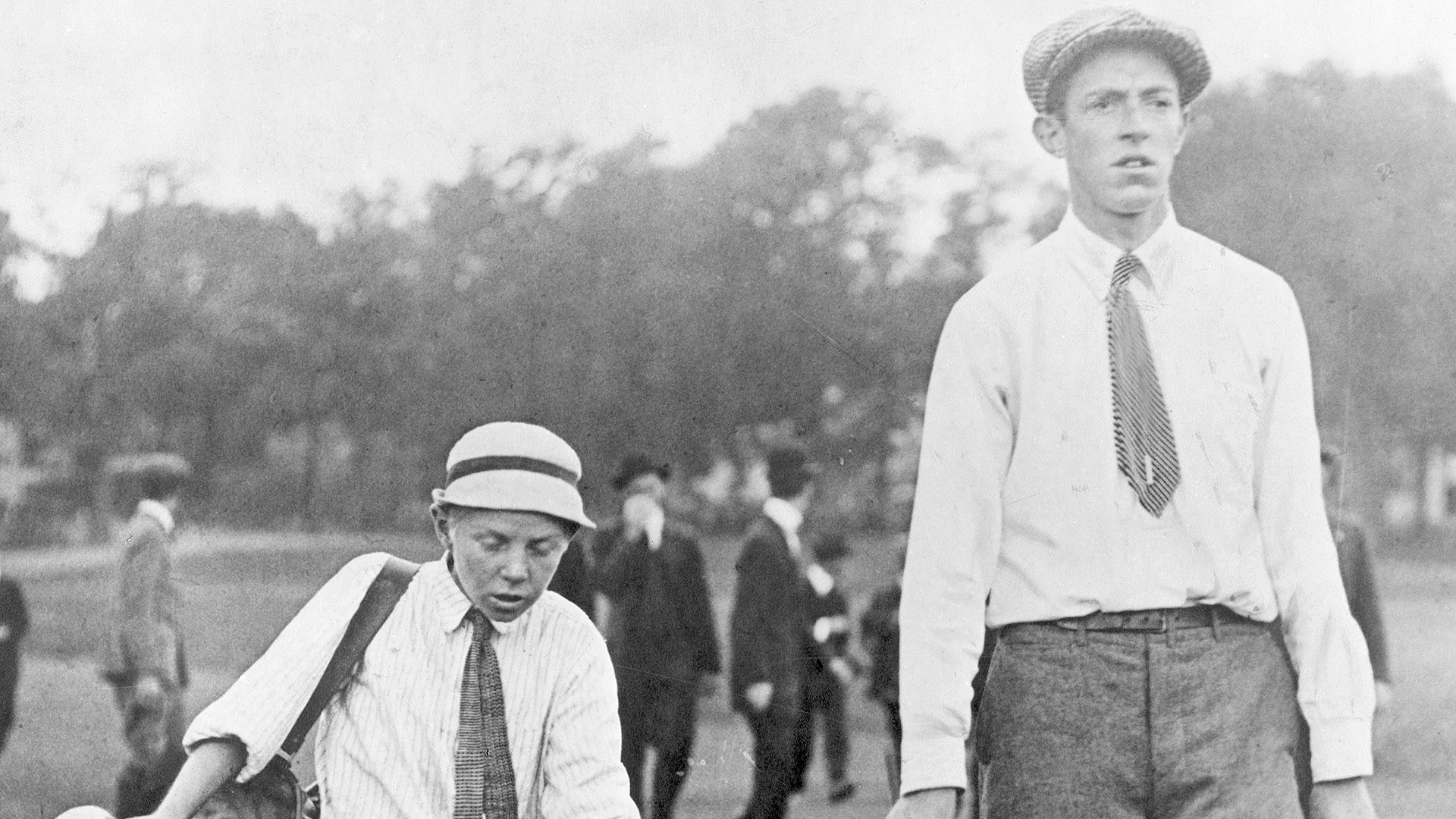 (Editor's note: This story is part of a series that ran in 2013 on GolfChannel.com, celebrating the 100-year anniversary of Francis Ouimet's U.S. Open victory.)

His eyes welled. At any moment, tears were going to cascade down the 10-year-old boy’s ivory, cherubic cheeks. The trepidation flooded his face as swiftly as it did honestly.

He had worked so hard and for so long, believing in the impossible even when no one else did.

“I’ll stick with Eddie,” Francis Ouimet said one September day in 1913; his loyalty to Eddie resolute.

And just like that, little Eddie Lowery dried his eyes. He and Francis were going to finish what they started. Together.

Eddie Lowery was born in Newton, Mass., on Oct. 14, 1902 – the second of seven children from a poor Irish family. He is most widely remembered as the 10-year-old who caddied for Francis Ouimet – a 20-year-old amateur from meager means – when Ouimet took down Ted Ray and Harry Vardon in a playoff at the 1913 U.S. Open.

But what Eddie did those three days at The Country Club in Brookline, Mass., was much more than lugging around a bag full of clubs; the experience would forever change the trajectories of his and Ouimet's lives.

“My little caddie, Eddie Lowery … not much bigger than a peanut, was a veritable inspiration all around; and a brighter or headier chap it would be hard to find,” Ouimet wrote for The American Golfer.

“(Eddie’s) influence on my game I cannot overestimate.”

It was by sheer coincidence that Eddie came to caddie for Ouimet. Eddie and his brother, Jack, played hooky from school on Thursday – the day on which the first two rounds of the U.S. Open were slated – but his brother got caught and was sent back to school. The tenacious and venturesome Eddie, however, escaped and made his way to The Country Club. 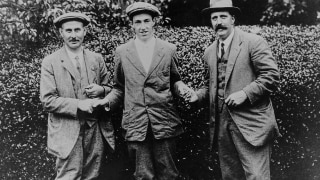 "Eddie takes three street cars, skips school, shows up at Brookline and runs up to Francis," Mark Frost, author of “The Greatest Game Ever Played” described. "It's about 10 minutes to [Ouimet's] tee time. [Eddie] explains that Jack isn't coming ‘cause he had to go back to school. And Francis says, 'Well, thanks for coming to town,' and starts walking away. And Eddie says, 'I could caddie for ya.' And Francis says, 'Eddie, you're shorter than my bag, you can't do this.' And Eddie ends up convincing Francis that he's the guy who should carry his bag in the Open."

After Ouimet duck-hooks his first shot about 40 yards into the rough, Eddie “almost grabs him by the tie and says, 'Now listen, Francis, you gotta settle down. We're not going anywhere unless you focus and get your mind back on this next swing,' " Frost details.

Throughout the remaining 89 holes they would play together, Eddie repeatedly told Francis to “Keep your eye on the ball.” He also remarked, “Take lots of time; it’s only 10 o’clock now and you’ve got until six tonight. Get this one up, dead sure;” and “You’re going to get a 72.”

“The lad was so certain I was going to win that it would not have surprised me had he gone up to my opponents (Ray and Vardon) on the first tee and said: ‘When does your boat sail for England? You might as well begin to pack,’” Ouimet said in The American Golfer.

A hat was passed around after Ouimet’s win, and it is reported that somewhere between $50 and $150 was raised for little Eddie.

The relationship Ouimet had with Eddie in the '13 U.S. Open almost seems as if it were scripted out of Hollywood. The story of that 1913 U.S. Open was eventually made into a book (Frost's “The Greatest Game Ever Played”) and later adapted into a feature film, but by no means was 10-year-old Eddie Lowery – or his tenacity and influence on Ouimet’s win – make-believe.

“It was one of the great good fortunes of my life to come upon this story and realize that nobody else had written it yet,” Frost said. “Lots of people thought I made Eddie up.”

Not only was Eddie not made up, he was a large reason why director Bill Paxton tackled the project and turned it into the 2005 movie starring Shia LaBeouf (playing Francis Ouimet) and Josh Flitter (playing Eddie Lowery).

“When I read this, it’s quite a story,” Paxton said. "The relationship with a 10-year-old caddie, at the U.S. Open? Can you imagine?

“My father used to tell me stories and when I heard this one of Francis and little Eddie, it was like mother’s milk to me.”

Those three days that Eddie was on the bag helped Francis beat the world’s best players, which ultimately led to the first golf boom in America. It would also help shape how Eddie viewed himself and it would direct how he lived his life – like the gentleman Francis Ouimet was.

“For (Eddie), he was not the hero. Francis was,” said Lowery’s daughter, Cynthia Wilcox. “He was always grateful for what Francis did for him, sticking with him in that playoff. I am convinced that the reason he was so successful was because of that incident.

“My father’s success was based on his desire to live up to Francis Ouimet’s grace and dignity. … I think a lot about what my father’s life would have been like if (Ouimet) had not used him in the playoff. … I truly believe that it is because of Francis Ouimet’s selfless decision to stick with my father that made this life possible.”

After the U.S. Open, Eddie became a local celebrity and a fine golfer, himself. At age 16, he won the 1919 Massachusetts Golf Association Junior championship and then defended his title the next year. He also won the 1927 Massachusetts Amateur and was runner-up in 1931 and ’33. He became the caddie master at Woodland Golf Club, was a sports writer for the Boston Traveler and then worked his way into advertising where he first enjoyed financial success.

Lowery went on to become a multi-millionaire when he moved to California in 1937, joining the management of Van Etta Motors, which he subsequently bought and built into the largest Lincoln-Mercury dealership in America; he later acquired two additional dealerships.

He was often regarded as “Mr. San Francisco Golf,” as he remained intimately involved with the game and sponsored many amateur golfers, including Ken Venturi (1964 U.S. Open champion) and Harvie Ward (1955 and 1956 U.S. Amateur champion), who worked for Lowery at his dealerships.

Lowery also served on the executive committee of the USGA. Lowery got into some hot water with the USGA when he claimed certain disallowable business expenses for tax write-offs, which in turn affected his sponsorship of Ward. And Ward, who had trusted Lowery's USGA expertise, had his amateur status revoked in 1957, at a time when he had won the previous two U.S. Amateur titles.

Lowery is also the man responsible for arranging what is considered the greatest fourball match ever in which amateurs Venturi and Ward faced off at Cypress Point against professionals Ben Hogan and Byron Nelson. The story of that day is chronicled in depth in Frost’s 2007 book “The Match: The Day the Game of Golf Changed Forever.” The two teams traded birdies and eagles the entire round, but Hogan and Nelson won, 1 up, when Hogan sank a 10-foot birdie putt at the 18th.

“Mr. Lowery never lost his colorful, profane working-man's Boston accent, despite the many years he spent selling Lincolns at his car dealerships in San Francisco and on the Monterey Peninsula,” former Cypress Point head professional Jim Langley wrote for Sports Illustrated. “You'd hear him on a clubhouse phone saying, ‘How many cahs did we sell today?’ If you went to his showroom looking to buy last year's model, he'd say, ‘I'm going to sell you a brand-new ... cah.' "

Lowery and Ouimet remained lifelong friends and visited one another often, including reuniting at the 1963 U.S. Open to celebrate the 50-year anniversary of Ouimet’s win.

Eddie also contributed significantly to the Francis Ouimet Scholarship Fund and was a sponsor of the Ouimet Museum.

The image of Lowery carrying Ouimet’s bag in 1913 was featured on a 25-cent stamp issued in 1988. Lowery was one of the pallbearers at Ouimet’s funeral when he died in 1967.

In 1999, a Ouimet and Lowery statue was unveiled at the World Golf Hall of Fame, and he and Francis were also inducted into the Caddie Hall of Fame.

“He lived the story of 20th century American golf. There's an effort to have Mr. Lowery put on the ballot for possible election into the World Golf Hall of Fame," Langley said in his Sports Illustrated piece. "There's already a statue of him there, with his lifelong friend Francis Ouimet. I'd love to see him get in. He was a good player, a member of the USGA executive committee, a benefactor for amateurs and a friend to many caddies.”

Were it not for those four words uttered by Francis Ouimet that September day in 1913, little Eddie may not have stepped up in a big way – helping to shape the future landscape of golf in America. 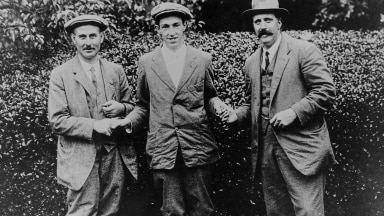 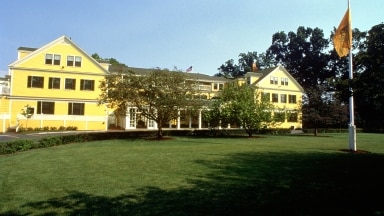 Brookline, 1913: The Country Club, a history

Although he wasn't made an honorary member until 1953, Francis Ouimet held a special place in his heart for The Country Club. 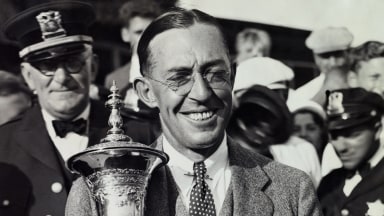 Brookline, 1913: The search for Francis

From his daughter's home to the Ouimet Room, a look into the journey to discover the personal side of Francis Ouimet.