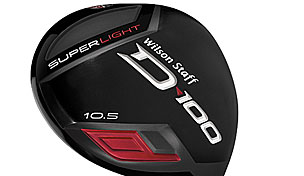 While Wilson Golf likes to consider itself an “iron” company, officials there say they are nonetheless intent on producing “best-in-class” drivers. Hence the rollout this month of its D-100 driver, which they describe as the lightest and easiest-to-swing driver on the market, adding that it is also designed to be powerful, solid and balanced.

As is the case with other members of the D-100 family, these drivers are geared for the Super Game Improvement segment. By optimizing the employment of the grip, shaft and head components, Wilson engineers were able to lower the total weight of the club to 269 grams.

According to the company’s global director of research and development, Michael Vrska, that enables players to swing faster with the same effort. And theoretically, faster swings lead to greater clubhead speeds, which produce more distance off their drives.

At the same time, Vrska says Wilson has used enhanced-cup face design and variable-face thickness technology in the D-100 driver to not only elevate the CT (Characteristic Time) of the face by 9 percent, so it’s hotter but also enlarge the sweet spot for more distance and forgiveness on off-center hits.

In addition, he said the company was able to create an optimized crown weight by relocating mass to the sole for a lower and deeper CG (Center of Gravity). This provides for a higher launch angle and increases MOI (Moment of Inertia) as a way of improving stability and forgiveness.