Wood eagles 18, tops Garcia by one at Qatar 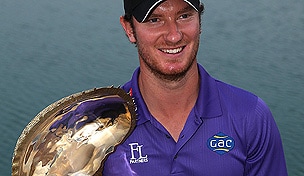 The 142nd-ranked Englishman shot 200 yards to the green with a 6-iron and watched the ball roll to within 12 feet. Wood calmly sank the putt to finish the final round at 3-under 69 for an overall 18-under 270. Garcia and Coetzee had looked set for at least a two-man playoff after both birdied the last hole.

''Winning on the European Tour is not easy,'' said Wood, who earned a victory in his 115th tour event. ''It was a nice way to finish. It feels good to pick up the trophy. I've been waiting patiently for my turn and fortunately it came today,''

Wood came into the final day with a three-shot lead over former U.S. Open champion Michael Campbell, Simon Khan and Alexander Noren after the third round.

But Wood almost threw the victory away early, after he missed a birdie putt on No. 2 and then double-bogeyed the par-3 third.

The 48th-ranked Coetzee, also looking for his first European Tour win, had three birdies on the final four holes on the front nine and then eagled the 10th to take a two-shot lead. Garcia got into the hunt with his much-improved short game, with six birdies on his final 11 holes.

Wood recovered with some clutch putting down the stretch. The win moves Wood into the top 60.