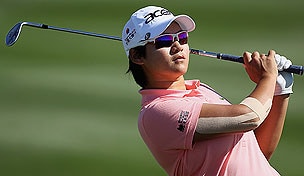 World No. 1 Yani Tseng believes the stars may be aligning for her to have a big year again.

At least that’s what her mother is telling her.

“My mum told me last year was a bad year for Dragon, and I was Dragon,” Tseng said in her news conference Wednesday leading into the start of the 2013 LPGA season at the ISPS Handa Women’s Australian Open. “So my Mum say, `It’s OK, your bad year is over. Your good year is coming this year, the [Year of the] Snake.’ I go, `OK, that’s good. So, I’m very excited for this year.”

For Dragons, here’s what lies ahead in the Year of the Snake, according to Feng Shui, a Chinese system of divination: “The year 2013 offers many opportunities and lucky breaks that will help you attain big improvement both in work and at home. Make sure you make the most of the good vibes and favorable stars blowing your way in your Feng Shui chart.

“According to your Bazi Birth Element chart, your Life Force and Spirit Essence are excellent, which means your vitality, energy and enthusiasm are very high. Your success luck is also fabulous. You will have lots of vigor and zest to pursue your goals and attain prosperity and big success. Your wishes and life’s aspiration are very likely to actualize in the Year of the Snake 2013. Treat the year as a magical wish-fulfilling year.”

Tseng won three times in the first three months of 2012, giving her 15 victories in 15 months. She couldn’t maintain that remarkable level of success through the rest of last year and. She missed three of four cuts in the summer and went 12 consecutive rounds without breaking par.

“Yeah, that was a terrible year she had last year, three wins, $1.5 million,” Webb said. “I would have hated to have a year like that.”

Tseng said she is focusing on what went right last year and learning from what didn’t go right.

“I know it’s been a tough year for me, but when I look back, I have three wins, I have [11] top 10s, so that’s still pretty good,” Tseng said. “All the people are putting high expectations on me, even myself, too.  I’ve been putting so much pressure on myself, and then it’s like I practice so hard. It’s almost overdoing it, because I never practice so much like last year and then all the expectation were way high . . . I’ve been learning a lot.  I think last year was very challenging for me, and I’m growing a lot from last year.”

Tseng’s run at No. 1 reaches exactly two years this week. She said she’s trying to focus on what she has to be grateful for through all her success. She cracked that she’s even going to show more appreciation to her golf clubs.

“I never say thank you to my club,” Tseng said. “My club is my best friend. I do my job and my club does his job.”