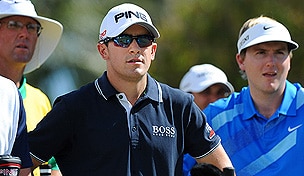 As Scott Langley and Russell Henley continue to prove at Waialae that age is just a number, here are some facts to keep in mind heading into the final round at the Sony Open in Hawaii:

• Langley and Henley both hope to start their rookie seasons with a victory, but should either take the trophy home Sunday it would end a lengthy streak against players in their maiden events as Tour members. The last rookie to win in his debut start was Garrett Willis, who won the Tucson Open in 2001 when the tournament served as an opposite-field event to the winners-only Mercedes Championships at Kapalua.

• Tim Clark has a chance Sunday to claim his first worldwide victory since the 2010 Players Championship. Clark, who struggled for much of last year following an elbow injury, recorded only three top-10 finishes in 20 starts on the PGA Tour in 2012. The South African clearly has an affinity for Waialae, though; he was a runner-up here in his last appearance in 2011 and has never finished outside the top 25 in three prior starts in Honolulu.

• Danny Lee didn't have a spot in the tournament field a week ago, but nevertheless heads into the final round with a chance to win. After shooting a 5-under 65 to earn medalist honors at the Monday qualifier, Lee has fired three straight rounds of 66 and now finds himself tied for sixth after three rounds, five shots behind Langley and Henley. The native of New Zealand, who missed out on a PGA Tour card by one shot at Q-School last fall, missed the cut at Waialae last year but appears to have found considerable more success in Honolulu this time around.

• Like Lee, Russ Cochran is making the most of a spot in this week's field earned through the Monday qualifier. The 54-year-old Cochran, who now plays most of his golf on the Champions Tour and won the Senior British Open in 2011, last played on the PGA Tour in 2009 at the Zurich Classic, where he missed the cut. A 3-under 67 on Monday, however, earned the southpaw a tee time on Thursday, and after a 4-under 66 in the third round Cochran will begin Sunday at 8 under, tied for 24th and nine shots off the pace.

• Charles Howell III appears in position to bolster his already-stellar record at the Sony Open, entering the final round four shots off the lead in a tie for fourth. Howell who was a runner-up last year, is seeking his seventh top-5 finish at Waialae since 2002, and could eclipse $2 million in career earnings at this event with a solid round on Sunday. It will likely take more than a solid round, though, for Howell to end a winless drought on the PGA Tour that dates back to 2007.