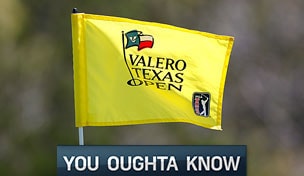 After three rounds in windswept San Antonio, Billy Horschel stands atop the leaderboard heading into the final round of the Valero Texas Open. Here are some facts that You Oughta Know as a final invite to the season's first major remains on the line Sunday at TPC San Antonio:

• Though multiple major champions loom on the first page of the leaderboard, there is still a good chance that the field at the Masters will increase by one based on the winner Sunday in San Antonio. Seven players, including Horschel, will begin the final round inside the top 10 with hopes of securing a Masters invite with a victory. The last player to make the field with a win the week before the season's first major was Johnson Wagner, when he claimed the Shell Houston Open in 2008 for his first career title.

• Only four shots off the pace, Bob Estes will try Sunday for his second career Texas Open title – though his first came nearly two decades ago. When Estes won this event at Oak Hills in 1994 over Gil Morgan, the final leaderboard included names like Craig Stadler, Ben Crenshaw and Mark O'Meara. The 46-year-old Estes, who has won four times on Tour but not since 2002, has had a steady season thus far in 2013, with six top-40 finishes in seven starts.

• To say that Charley Hoffman enjoys teeing it up in San Antonio might be an understatement. Since 2006, Hoffman has made seven Texas Open starts, with six resulting in a top-15 finish – including a runner-up showing in 2011. This year, he will begin the final round tied for second just two shots behind Horschel, seeking his first PGA Tour win since the 2010 Deutsche Bank Championship.

• Playing on a sponsor exemption after narrowly missing out on the Masters field following his European Tour win last week, Marcel Siem appeared headed for an early exit after an opening 76 Thursday. The German, who flew from Morocco to San Antonio via Germany to tee it up this week, rebounded with a 5-under 67 Friday, then followed that with a 3-under 69 Saturday. One of many in the field who can earn a trip down Magnolia Lane only with a win on Sunday, Siem will begin the final round tied for 12th, six shots off the pace.

• After a 2012 season defined by near-misses, Jim Furyk is once again in position to end a winless drought that surprisingly stretches back to the 2010 Tour Championship. Furyk, who had five top-five finishes last year, begins Sunday tied for second, one of only two players along with Horschel to play the AT&T Oaks Course in 70 shots or fewer each of the first three days. His lone top-10 finish this year came three weeks ago, when he tied for seventh at the Tampa Bay Championship.

• Though Rory McIlroy may now carry more momentum into the first round of the Masters after his performance this week, one thing he won't be able to take with him to Georgia is the world No. 1 ranking. McIlroy, who will begin the final round tied for fourth, still cannot pass Tiger Woods atop the world ranking even with a win Sunday in Texas. He could, though, cut his deficit significantly, which could add yet another wrinkle to the multitude of storylines that will unfold next week.