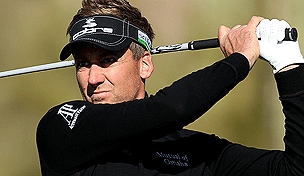 Having survived snow, sun and four opponents each, four men are left standing to vie for the title at the WGC-Accenture Match Play Championship. Here is what You Oughta Know as Matt Kuchar, Ian Poulter, Jason Day and Hunter Mahan get set to square off in another marathon day of golf Sunday:

• For the third straight year, the U.S. has two representatives among the final four participants at this event. Last year, Mahan won the title while in 2011 both Americans, Kuchar and Bubba Watson, fell in the semifinals. The last time the U.S. had as many as three players in the semifinals was 2008, when Tiger Woods defeated Stewart Cink for the title while Justin Leonard finished fourth.

• With seed Nos. 3 (Poulter), 6 (Kuchar, Mahan) and 11 (Day) advancing to Sunday, this marks the first year since 2007 that the semifinals do not feature either a No. 1 or a No. 2 seed. That year, the semis included three No. 3 seeds, one of which – Henrik Stenson – ultimately won. Should Kuchar or Mahan take the title, it would be the second straight year a No. 6 seed won it all, while Day is hoping to become the first double-digit seed to win since fellow Aussie Geoff Ogilvy claimed the title as a No. 13 seed in 2006.

• As the champion of the Jones Bracket, Day may hold a bit of an advantage heading into Sunday's play. While this marks the 15th edition of this event, the winner has emerged from the that portion of the draw a remarkable eight times. The most recent occurrence was in 2011, when Luke Donald won the Jones Bracket and also took home the trophy, while last year Mahan won the event after starting the week in the Hogan Bracket.

• After capturing the WGC-HSBC Champions in China last November, Poulter is vying to win back-to-back World Golf Championship events, having also won this tournament at Dove Mountain in 2010. The last player to pull off such a feat was, not surprisingly, Woods, who did so multiple times, most recently with wins at both the WGC-Cadillac Championship and WGC-Bridgestone Invitational in 2007.

• If Mahan is able to repeat as champion, it will be largely on the back of a solid putter. While he is not exactly known for having the best short game around, Mahan has remarkably holed each of the 53 putts he has faced this week inside of 10 feet. Should he take home the Hagen Trophy in consecutive years, he would become only the second player to do so, after Woods accomplished the feat with wins in both 2003 and 2004 when the event was staged at La Costa.

• While several matches have been close this week, don't expect Sunday's final to go the distance. Although the tournament moved to an 18-hole final a few years ago, the event's ultimate match has not reached the final hole since Kevin Sutherland beat Scott McCarron, 1 up, in 2002. The only time the final ever went to overtime was in the event's first year, 1999, when Jeff Maggert downed Andrew Magee with a chip-in birdie on the second extra hole.