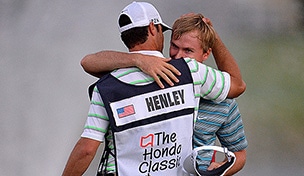 PALM BEACH GARDENS, Fla. – Russell Henley made good on his second chance at the 18th hole Sunday and won the Honda Classic after a wild day that began with Tiger Woods walking off the course with a back injury and ended with a four-man playoff.

The closing hour at PGA National was a series of blunders by the contenders - and even the winner.

Henley was in a three-way tie for the lead, 40 yards left of the flag on the par-5 18th in regulation, when he chunked a chip so badly that it only got halfway to the hole. He had to two-putt for par, and then watched as Rory McIlroy nearly made a great escape from an otherwise bad afternoon. McIlroy, who lost a two-shot lead, hit a 5-wood from 236 yards to just inside 12 feet for an eagle and the win. It narrowly slid by on the right.

In the playoff, Henley was the only player to reach the 549-yard hole in two, and he two-putted from about 40 feet for birdie. Ryan Palmer missed a 10-foot birdie putt. McIlroy went from the back bunker to the front collar and had to scramble for par, and Russell Knox laid up and missed a 20-foot birdie attempt.

''This isn't going to sink in for a while,'' Henley said.

Thousands of fans who spent hours in the warmth and wind of south Florida surely felt the same way.

Woods abruptly quit after 13 holes and was driven straight to his car. He later said he had lower back pain and spasms, and was unsure if he could play at Doral next week. And then came all the mistakes by four guys trying to win.

Palmer missed a 5-foot par in regulation that would have won it. He closed with a 69, the only player in the last six groups to break par. Knox needed a birdie on the last hole, but he went from the fairway bunker to the rough, well over the green and then calmly made a par putt just inside 10 feet for a 71 to get in the playoff.

The conditions were tough. The play was so underwhelming that McIlroy said that if he had won, ''It would have felt undeserved in a way.''

He won't know that feeling.

Instead, the 24-year-old from Northern Ireland closed with a 74. It was his second straight tournament in stroke play that he played in the final group and shot 74. He tied for ninth in the Dubai Desert Classic. His undoing came on the 16th, when McIlroy missed on a 6-iron from the bunker and went into the water, making double bogey. He fell out of the lead for the first time with a bogey from the bunker on the 17th.

What should ease the pain was his finish - a 5-wood he couldn't afford to miss that dropped from the sky to 12 feet left of the hole.

Henley, who closed with a 72, won for the second time and qualified for the Masters. He also moves into the top 50 in the world ranking, making him eligible for the Cadillac Championship next week at Doral.

It was the first playoff at PGA National since 2007, which also featured four players.

McIlroy was at 13 under after a birdie on the fifth hole and appeared to be on his way, even after twice making bogey from the bunker to close out the front nine.

PGA National was tougher than ever after a weekend of sunshine, and the stiff breeze in south Florida. The average score was 71.8, two shots harder than the third round.

Henley tied for the lead by chipping in for birdie on the 14th, only to deposit his tee shot on the par-3 15th into the water for double bogey. Palmer missed a 6-foot birdie putt on the 14th hole, which wasn't nearly as damaging as the par putts he missed from 8 feet on the 16th and 5 feet on the 18th.

Knox fell out of a brief share of the lead when he tried to play from the right rough on the 14th and had his shot carom into the water for a double bogey.

At least they were still around.

Woods was just a guy in a red shirt at PGA National when he shook hands with Luke Guthrie, his playing partner, and told him he was done.

''Too early to tell,'' Woods said in a statement about playing next week at Doral. ''I'll get treatment every day to try to calm it down. Just don't know yet. Wait until Thursday and see how it feels.''

It was the second straight year that the world's No. 1 player walked out on the Honda Classic. A year ago, McIlroy was so frustrated with his game that he quit after 26 holes. At least this time, McIlroy stayed until the wild end. It just wasn't the finish he wanted.