MELBOURNE, Australia – Tiger Woods gave the record crowds at the Australian Masters everything they could have wanted with his victory Sunday, except a definitive answer when he would return.

“I promise it won’t be as long,” Woods said to yet another warm ovation.

Woods took the lead for good with a 7-iron to within 4 feet for birdie on the fifth hole, and he hardly missed a shot the rest of the way for a 4-under 68 and a two-shot win over Australia’s Greg Chalmers.

He won for the seventh time this year, and the 82nd time worldwide in his career. Woods now has a trophy from every continent where golf is played. Australia, the 13th country where he has won an individual event, had been the missing link.

It had been 11 years since Woods last competed in Australia, at the 1998 Presidents Cup. Since then, he has won 13 majors and 72 times around the world, becoming the face of golf and one of the most famous athletes in the world.

More than 100,000 fans who passed through the gates of Kingston Heath gave him rock-star treatment.

Woods put on quite a show.

One day after he lost his swing and nearly fell out of contention, Woods hit every fairway and only ran into trouble when a photographer standing too close clicked twice in the middle of his swing, leading to his lone bogey.

Starting the day in a three-way tie for the lead, Woods began his final round with a 3-wood to the par-5 first hole that landed next to the hole and rolled 30 feet away, producing the first of many roars from thousands of fans surrounding the green, some of them perched in trees.

After his birdie on the fifth, he followed with his most exquisite shot of the day – from 82 yards away to a firm green just over a ridge, the pin on a slope feeding toward a deep bunker. Playing a 56-degree wedge for a flatter shot, it bounced 30 feet from the flag, checked slightly and trickled down the slope to 2 feet.

“It came off perfect,” he said.

Chalmers, who hasn’t won on his native soil since 1998, found consolation in his runner-up finish. It was one of the biggest weeks of golf in Australia, energy not felt since the glory days of Greg Norman.

He stayed within range of Woods on the back nine, but failed to convert a couple of good birdie chances and shot 70.

“It was like a football crowd brought to the golf, and for us as players, I have only experienced that a handful of times, and I’ve never experienced it in Australia at all,” Chalmers said. “That was special. It really was very exciting, and it made you play better. Even though I finished second, I’m thrilled that he’s here. I wish he would come every couple of years. I’m sure we all do.”

Asked on live television, the closing ceremony and in his press conference about returning, Woods only said, “I would love to.”

“I want to come back, no doubt,” Woods said.

He said he would go over his 2010 schedule during the holidays, although Australians are assured of at least seeing him in two years at Royal Melbourne for the Presidents Cup.

Woods received a $3 million appearance fee to play in the Australian Masters. Half of that fee was paid by the Victorian government, which estimated the economic return at $20 million.

Woods wasn’t too shabby on the golf course, either.

One week after he fell apart in the final round at the HSBC Champions in Shanghai, Woods sorted out his swing problems overnight and was precise as ever around Kingston Heath. He saved par with a 10-foot putt on the ninth, and he reached the 574-yard 12th hole into the wind with a 3-wood for a key birdie.

The only mishap came on the 13th, with a sand wedge in his hand.

“I thought I was in control of the tournament after I made that birdie on 12,” Woods said, “and then a photographer took the control right away from me.”

The photographer, standing unusually close, took two pictures in the middle of his swing, and the ball sailed right of the green. Still fuming on the par-5 14th, he failed to make birdie and left himself open to Chalmers cutting into the lead.

On the next hole, however, Woods hit an 8-iron that had the crowd buzzing during its entire flight, the cheers getting louder as it covered the flag and rolled 6 feet beyond the hole. He made the last birdie he needed.

The result was Woods slipping into a jacket after winning the Masters – this one Australian gold, not Augusta green, but it will do. He finished at 14-under 274 and earned about $250,000 from a purse that was half the size of his appearance fee.

American Jason Dufner, who received an exemption between tournaments in Asia, shot 70 and tied for third with Frenchman Francois Delamontagne (69). James Nitties, part of that three-way tie for the lead going into the last round, shot 73 to finish fifth, while fellow Australian Adam Scott recorded his second straight top 10 finish with a 69 to tie for sixth.

Asked what legacy he would leave behind, Woods smiled and said, “I got a W. That was the goal this week.”

No matter the country, the time zone or the size of the gallery, that’s one thing that doesn’t change. 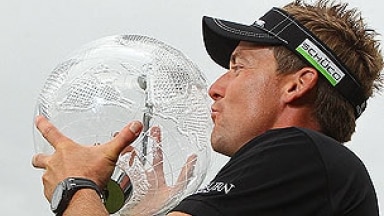 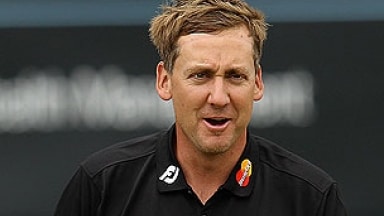