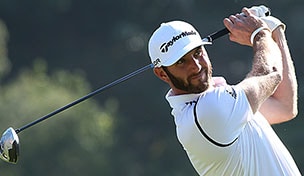 While the first round of the WGC-Accenture Match Play Championship saw only nine "upsets" on paper - the fewest in the history of the event - the results from Wednesday at Dove Mountain still caused many brackets to go up in flames. Here's a look at some stats based on Golf Channel fantasy participants:

• Did your overall champ bow out in the first round? You're not alone. A total of 36.4 percent of bracket participants lost their projected winner on Day 1, headlined by Dustin Johnson who was picked to win it all by 16.2 percent of players. Nearly 7.3 percent of brackets believed that Zach Johnson would continue his hot start to 2014, but their brackets were busted when Johnson became the lone No. 1 seed to lose Wednesday.

• There's a strong chance that your predicted semifinal matchups took a hit based on Round 1 results. Only 17.1 percent of brackets still have their Final Four intact heading into Thursday's second-round action.

• With Dustin Johnson's elimination, the most popular pick left to win it all is Rory McIlroy, who was tabbed to claim the trophy in 12.4 percent of brackets. Jordan Spieth was a similarly popular choice this week, picked to win in 12.3 percent of brackets, while 8.2 percent of participants think Jason Day will bring the title back to Australia.

• If you predicted upset wins by Peter Hanson and Richard Sterne, you might want to go buy a lottery ticket this weekend. Only 2.3 percent of brackets had Hanson, who has gotten off to a slow start in 2014, defeating a red-hot Dustin Johnson, while just 2.6 percent pegged a win for Sterne as a 16 seed over Zach Johnson. The only other surprise winners that were picked to win in less than 20 percent of the brackets were Jonas Blixt (14.5 percent) and Rickie Fowler (15.7 percent).

• If someone brags about a perfect bracket, don't believe it. After 32 first-round matches, the best overall W-L record among Golf Channel participants was a 28-4 mark - and that was only achieved by a single individual. As is usually the case, the opening matches of golf's bracket tournament are much more difficult to predict than those from its counterpart in basketball.