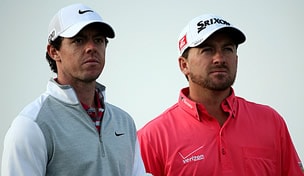 Getty Images
“I take it as I need to improve as a man.” – after being named one of the Tour’s least popular players in an ESPN survey  -

This week marks the 15th event of the 2013-14 PGA Tour season, as players move east to start the Florida swing at the Honda Classic. A field of 144 players will tackle PGA National, where the Bear Trap serves as one of the more difficult finishing stretches on Tour.

Michael Thompson returns to defend the title he won last year by two shots over Geoff Ogilvy. Here are 10 players to watch this week in Palm Beach Gardens:

1. Graeme McDowell: The Ulsterman appeared to have nine lives while staving off elimination last week in Tucson, but his game seems very much in order. McDowell has now begun 2014 with a pair of top-10 finishes and has cracked the top 10 in each of his last three trips to PGA National, including a T-6 result in 2011 behind a closing 64.

2. Rory McIlroy: A winner here in 2012, McIlroy only made it 27 holes last year before his tooth gave out. This time around, the Ulsterman appears to be returning to form, having translated a late-season win in Australia into a successful desert swing last month. While he got bounced early at Dove Mountain, McIlroy has the length to take advantage of PGA National and is likely motivated to make up for last year's early exit.

3. Charl Schwartzel: Like McIlroy, Schwartzel failed to make it past the second round last week in Arizona, but the week prior the South African was T-5 at Riviera after four straight rounds in the 60s. Schwartzel has only made three prior trips to this event, but each has resulted in a top-15 finish, including T-5 in 2012. He's only had one competitive round here higher than 71.

4. Adam Scott: In Scott's only prior start on the Champion Course, he shot 77-82 to miss the cut in 2011. Suffice it to say, things have changed since then. Scott hasn't played since notching back-to-back top-10s in Hawaii, so the Aussie should be well-rested for this week's date with PGA National. While low scores will be hard to come by, an emphasis will be placed this week on consistent ball-striking and the ability to limit mistakes - two factors that should play to his strengths.

5. Keegan Bradley: Despite an early exit last week, Bradley has been one of the more consistent players during the 2013-14 season, with five top-20 finishes in seven starts since October. Bradley is one of many players in this week's field with local ties, living in nearby Jupiter, and has cracked the top 15 each of the past two years at PGA National, including a tie for fourth in 2013. He's broken par on the Champion Course in five of his last eight competitive rounds.

6. Zach Johnson: A first-round exit at Dove Mountain broke Johnson's streak of three straight top-10 finishes, but he remains a name to watch on seemingly any venue. Fresh off his 38th birthday on Monday, Johnson is third in GIR percentage this season and eighth in par-5 scoring average - two keys to the Champion Course. This will be his first start at PGA National since 2008, when he tied for 30th.

7. Tiger Woods: Arguably the greatest enigma in this week's field. Woods is off to his worst start to a season as a pro, but just two years ago nearly caught McIlroy with a Sunday 62. Now a month removed from a disappointing MDF at Torrey Pines, the current world No. 1 will look to get his season on track while staying at home in nearby Jupiter Island. Failed to break par in any of his four rounds last year en route to a T-37 finish.

8. Rickie Fowler: Fowler is hardly the Tour's most consistent player, but will look to capitalize on his third-place finish at Dove Mountain while returning to an event where he has cracked the top 15 each of the last two years. Fowler has missed the cut in his last three stroke-play starts, but showed signs in the desert that his recent swing changes have begun to yield results.

9. Sergio Garcia: Garcia may still have to explain away his puzzling concession to Fowler during his third-round match, but a solid effort at PGA National will go a long way toward putting the controversy behind him. The Spaniard hasn't played here since 2008 but did tie for 13th in 2007, and his strong play across the past five months included a win last month in Qatar.

10. Lee Westwood: Westwood is struggling to find the form that took him to No. 1 in 2010, having lost last week in the first round after announcing a coaching change. Still, PGA National may be just the venue to get him back on track, as the Englishman lives nearby and has finished inside the top 10 in three of the past four years, including a fourth-place showing in 2012.