Am Tour: Charming the Snake Pit at Innisbrook 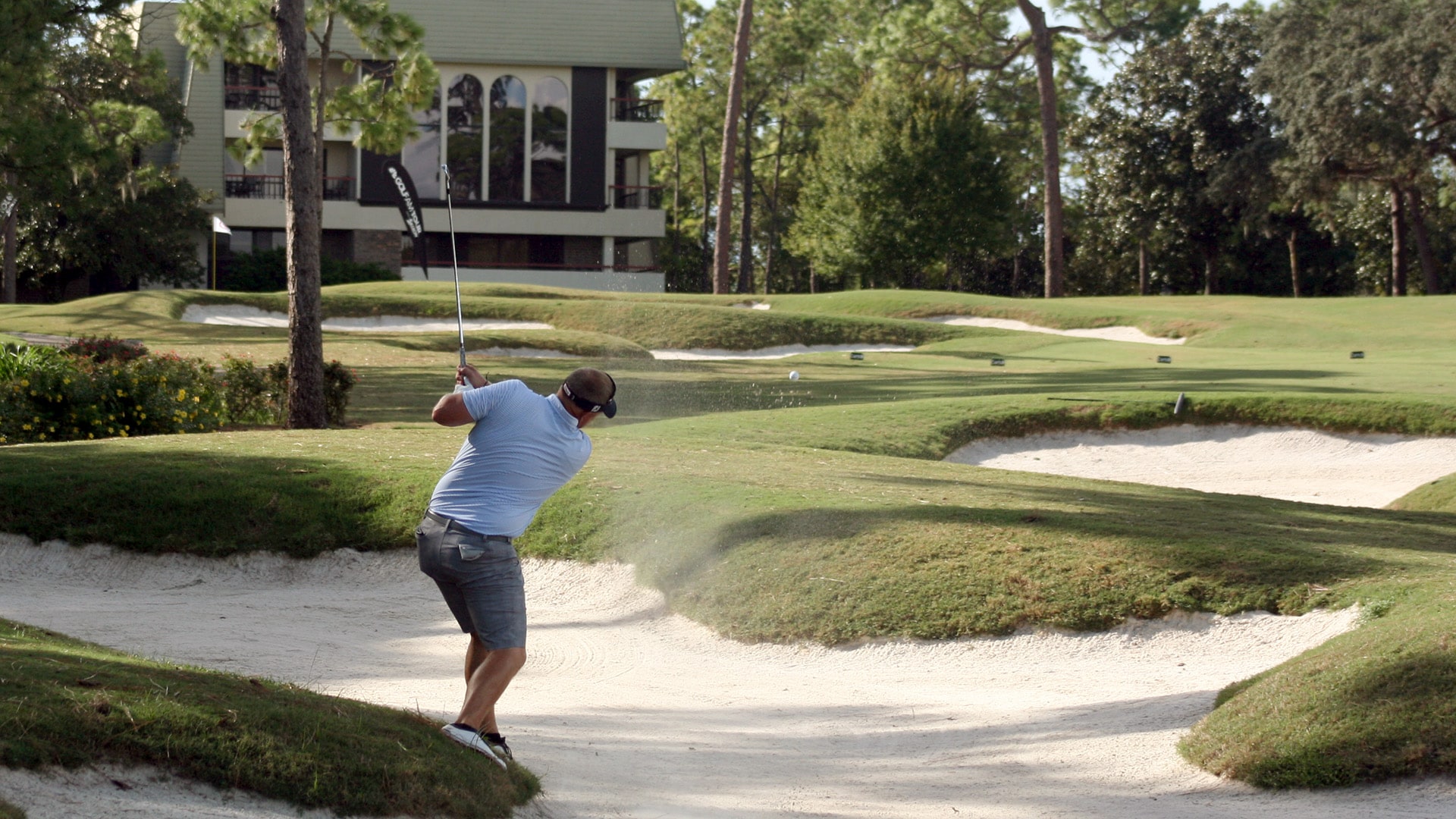 PALM HARBOR, Fla.  — Each year, the Golf Channel Am Tour National Championship venue features at least one course that has staged a top professional event, whether it’s been PGA West, TPC Sawgrass or Grayhawk Golf Club.

That’s been no different at Innisbrook Resort & Club, headlined by the Copperhead Course, host of the PGA Tour’s Valspar Championship. The layout is well known for its demanding finish, featuring two tough par 4s and a long par 3.

The Copperhead’s 16th, where the famed snake statue greets golfers, is well known on the PGA Tour as one of the more demanding par 4s, and that’s been no different at Am Tour, no matter which flight has seen the hole thus far.

In the 3rd round, it was the the Palmer flight navigating the Copperhead Course. I watched the final group, Josh Prok, Cole Philips and Dave Turpin play the back nine to see how their swings held up against the pressure.

It was Turpin who walked a tight line on each hole.

After Phillips hit first on 16 and found the water and Prok found trees left, Turpin's ball stayed dry by mere feet, thanks in part to a light breeze coming off the right.

"It’s the toughest tee shot we have the entire tournament," said Turpin. “It's just one of those shots you have to make a swing. You can’t bail out into the trees."

He then stuck it stiff on 17, a dangerous par 3 with bunkers on each side of the green, for a tap-in birdie. But his drive on 18, which has bunkers both left and right, rolled close to a slope and he had a bad stance. He ultimately finished with a double bogey.

For Phillips, poor drives to the right on both 16 and 18 for led to double bogeys on each hole, and his 85 moved him two shots back of the lead.

Ultimately, it was Prok, whose 4-4-4 at the Snake Pit, which included a par save from the left trees on 16 and a striped drive down the middle on 18 that led to a low-stress par, that was the lowest of the group on the closing stretch. It, was enough for him to place in a tie for the lead heading into the final round.

For Turpin, his three-putt double bogey on 18 keeps him a shot off the pace. But despite the roller coaster, he had a smile on his face walking off the 18th.

"We treasure that," being an ex-athlete, it's neat to be almost 50 years old and get nervous over a golf shot.

"If it wasn't for [holes like] the 'Pit we probably wouldn’t do it." 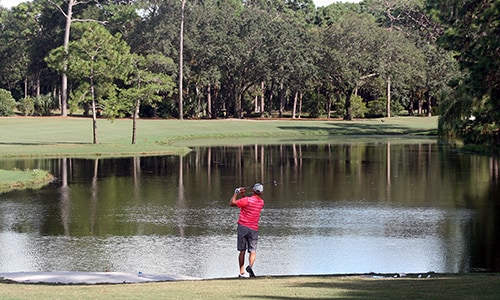 Missing your drive right on the 16th hole results in a penalty shot and a long, risky 3rd shot.

Moccasin has the biggest bite

From the tee, the 16th is a very intimidating look: the fairway wraps to the right around a large pond, while trees line the entire left side (there are a few pines between the pond and left trees for good measure as well). The worst part about the drive is that if you block your tee shot, as we found with Phillips’ drive, you have to take your drop far back, too far to go for the green, and the layup isn’t easy either. After three rounds of the National Championships, the 16th has been the hole to deliver the most scorecard carnage.

The Snead flight (20-plus handicaps) had a rough go of the hole to say the least, with an average score on the par 4 of 6.92 — easily the highest scoring average of any hole they've played so far after three rounds. The damage included 26 'others' on the scorecard.

In the Hogan flight (8.0-11.9 handicaps), the 16th had the highest stroke average (5.57) and most amount of others as well. In the Sarazen flight, the par-4 3rd hole was the toughest thanks to 31 'others' (this hole is the second toughest during the Valspar according to PGA Tour data) with the 16th a close second.

The Palmer flight, which has been the top flight to play Copperhead after three rounds, had a 5.33 stroke aveage on the hole (the highest of any par 4) and of the 119 players, 41 carded a double bogey or higher. There were only 9 'others' on 18, but 41 double bogeys gave it a slightly higher scoring average (5.36) than the 16th.

In the final round, the Championship and Jones flight (16.0-19.9 handicaps) will play the Copperhead, and so we’ll get a chance to see how low-handicap leaders handle the pressure versus the bogey golfers.

Stage set for final round

In the six flights to be crowned after Round 4 action tomorrow, some are much tighter than others.

At 1-over, Gant Bills, from Plano, Texas is running away with the Championship flight, up five shots over Earl Morley, from Palm Desert, California.

It’s a two-horse race in the Sarazen flight (12.0-15.9 handicaps): Ross Gonzales and John Burton (son of Rick) are tied at the top, clear of the field by four shots.

The Hogan flight, which is the largest of the flights this week, has seen some separation at the top: Nacho Orozco, from San Antonio, Texas holes a two shot over Troy Slate, from Canton, Georgia. Allen Chisholm, from Charlotte, has some work to do, five shots off the lead.

Lastly, it's anyone’s game in the competitive Palmer flight. It’s a three-way tie between Michael Rizarri, Joshua Prok and Donnie Hankins, but Turpin is just a shot back and six more players are within three shots of the leaders.