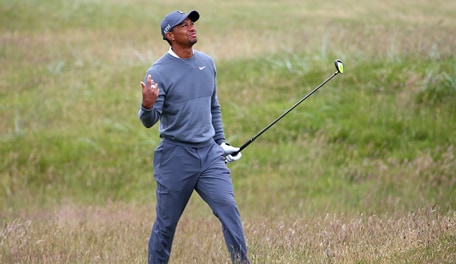 On a morning that featured some of the best scoring conditions players will find at an Open Championship, Tiger Woods limped to a 4-over 76 Thursday, his highest score as a professional at St. Andrews.

While Woods was still on the course, Golf Channel’s Brandel Chamblee joined the "Dan Patrick Show" to discuss what he had seen from Woods, to that point. The former world No. 1 went out in 40 before playing his back nine even par.

“Pretty much what I expected. I knew he was going to play pretty conservative,” Chamblee said. “Very conservative off the tee when the course was gettable. He was laying up to numbers and pot bunkers he previously just bombed it over – and I think he has the fire power to get it over them, he just wasn’t doing it – and then he was making all kinds of miscues with his irons.

“It’s sad to see this comparison of what Tiger Woods was to what he is now.”

Woods said after his round that he’s rooting for conditions to worsen Friday, which he believes could get him get back in contention if he can sneak in a good round while the rest of the field struggles.

Chamblee views such a prospect as unlikely. Asked if Woods could make the cut, Chamblee answered:

“Sure, it’s possible, but the way the tee times are lined up, he’s supposed to go out tomorrow in the 30-40 mph winds that are forecasted for Friday afternoon. It’s highly unlikely.

“He’s been at this swing change for seven or eight months. There’s signs of good swings. I like some of the things he’s doing. But I think that there’s a cost to what he’s been doing all these years, changing his golf swing, going from belief to doubt, belief to doubt, and now I think just to utter confusion.”