Funk joined his father, former Players champion Fred Funk, for a round with the Commander-in-Chief Monday at Trump International Golf Club in Florida.

"He actually played well. I was very surprised," the younger Funk told CNN. "He shot even par on the front and played decent on the back, too. He's definitely a lot better than I thought he was going to be."

The round capped a holiday stay in Florida for the president, where he also teed it up with PGA Tour pros ranging from Justin Thomas to Bryson DeChambeau. According to CNN, Trump has spent at least 86 days of his presidency at one of several golf courses that bear his name.

But this round was especially memorable for Funk, who nearly won the decisive match at the 2016 NCAA Championship that would have delivered Texas a national title over Oregon.

"He's a good player, he's a lot of fun to play with," Funk said. "Just very engaging, and really I don't have a bad thing to say about our round. It was amazing."

Taylor Funk showcased the day in a video blog that he posted to YouTube. You can view it below: 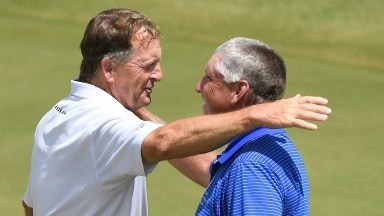 Fred Funk shot a 2-under 70 on Saturday to hold on to the third-round lead at the Regions Tradition.