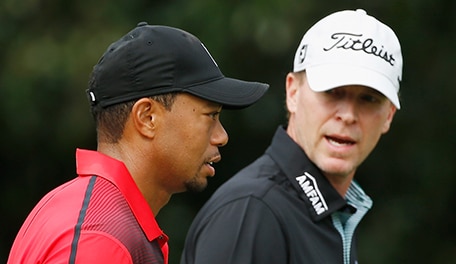 Tiger Woods will look to get back on the right track alongside good friend Steve Stricker when the Greenbrier Classic begins Thursday in West Virginia.

Woods will tee off at 8:10 a.m. ET Thursday (10 tee) with Stricker, his former match-play partner, and Memorial champion David Lingmerth. The trio will go off at 1:10 p.m. Friday.

Woods is making only his second appearance at the Old White TPC, following a missed cut in 2012. He is coming off a last-place finish at the Memorial, where he shot a career-worst 85 in the third round, and then an early exit at the U.S. Open, where he signed for the highest 36-hole score of his pro career (156).

Here are a few of the other featured groups this week in White Sulphur Springs, W.Va.:

Simpson is one of the favorites to win this week based on his record at the Old White TPC, with three top-10s in five tries, including last year’s third-place showing. Oosthuizen, coming off a tie for second at the U.S. Open, missed the cut last week at the Travelers Champoinship, where he made just one birdie over his two rounds. Casey lost in a playoff in Hartford, his second of the season and his sixth top-10 overall.

Coming off a win at the Travelers, Watson enjoys a home game of sorts at the Greenbrier, where he and his family have a residence. He has finished in the top 30 in each of his two appearances. Haas is a perennial contender here, including a runner-up finish in 2011, while Love will look to end a run of consecutive missed cuts.

Reed is playing his third event in a row, after fading on the weekend at the U.S. Open (T-14) and then missing the cut at the Travelers. Bradley was fourth here a year ago, which was his first finish inside the top 40. After an opening 64 at the Travelers, he shot even par the rest of the way and finished 39th. Cabrera is the defending champion at this event, but he has only a pair of top-25s in 16 starts this season.