Improve your sequence to stop coming over the top 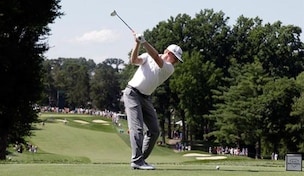 One of the most common requests that I get from golfers during lessons is to cure the over-the-top move.

I think if there is a “secret” to playing good golf that it is mastering the transition from the top of the backswing to the start of the downswing.

Many golfers start the downswing by unwinding the upper body and throwing the club out and over-the-top, which results in a path that is too steep and too much to the left.

A proper sequence of motion during the transition from backswing to downswing will result in a better path and more efficient swing.

The correct downswing sequence begins with a small lateral motion of the lower body toward the target while the shoulders remain closed to the target.

You can practice this move in front of a mirror with your arms crossed and hands on your shoulders.

Turn back making a backswing pivot, then, without moving the shoulders, move your hips laterally to the left. When you do this, your spine angle should tilt slightly more away from the target than before.

Once you have mastered this move you can then add hip rotation.

Again with your arms crossed and hands on your shoulders, make the backswing pivot, the initial lateral move with the lower body and then turn your hips so your left back pocket is over your left heel. You may also observe that your belt buckle is now more toward the target.

When hitting balls, I like to use feels and images to improve the swing.

Begin the downswing with a small “bump” of the hips to the left or toward the target.

An image I use with my students is to imagine a sponge filled with water underneath the left foot. Begin the downswing by squeezing the water out of the sponge.

Harvey Penick used to describe the “magic move” as a shifting of the weight toward the target while at the same time moving the right elbow down to the right side of the body.

Work to improve your downswing sequence for improved impact and a more efficient swing.