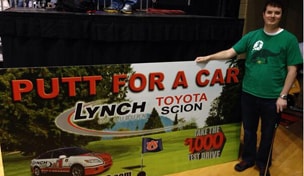 Getty Images
The Grill Room is bringing you the scoop on all things going on outside of the ropes at the 2015 Open Championship.  -

Patrick Burch doesn't play golf, and he says he's not even good at putt-putt. You'd never know it, though, after watching his effort Saturday afternoon at an Auburn men's basketball game.

Burch, 28, was randomly selected to attempt a long-range putt across the hardwood during a timeout at the game between Auburn and Mississippi State. He stood at one baseline, while at the other baseline was a promotional sign with a small hole.

Despite his lack of golfing experience - and the fact that up until today no one had ever made the shot during what is a regular promotion at Auburn games - Burch drained the putt, and won a new car for his efforts.

"I didn't even think I was going to hit the board," explained Burch, an IT worker from Birmingham. "That's like 90-something feet, right? I just put it down and hit it."

The putt was 95 feet to be exact, and Burch will now go shopping at a Toyota dealership in the area to choose a new ride. According to an Al.com report, he will receive a specific sum with which he can buy a new car, or he can opt to put that total toward a more expensive model.

It remains to be seen whether PGA champion (and noted Auburn fan) Jason Dufner will now seek out Burch for a few tips on the greens.