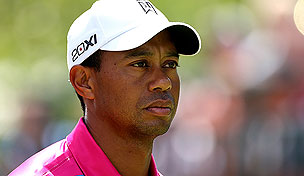 Billionaire Clive Palmer’s decision to erect a roaring, 26-foot robotic dinosaur at this year’s Australian PGA Championship wasn’t even his strangest yet.

On Monday, the billionaire owner of the Palmer Coolum Resort said that he’s not interested in having Tiger Woods play in his tournament because the 14-time major champion is 'an emotional wreck' and 'not a good example for kids.'

'Tiger Woods has improved a lot, but he’s an emotional wreck, and he’s not a good example for kids, anyway.'

It was reported last week that the Australian PGA was headed for a different course in 2013 and beyond after negotiations between Palmer and tournament officials broke down, though Palmer remained hopeful that the event would remain at his course – even with the dinosaur and the 60-plus painted signs promoting many of his own companies.

Instead of Woods – who, it should be noted, has never played the Australian PGA – Palmer will instead focus his efforts on wooing world No. 1 Rory McIlroy, even saying, according to the report, 'If you rang him now, he would probably tell you unless it’s at Palmer Coolum Resort, I won’t come. We can be sure he won’t come if it goes somewhere else. If it stays here, there is a chance he might come here. We had Darren Clarke and Bubba Watson.'