A Hazzard you want to be in: Bubba's hot wheels 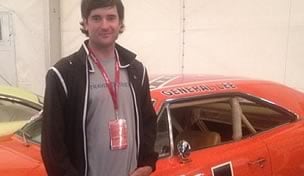 Getty Images
BETHESDA, MD - JULY 02: Jason Gore plays a shot from the rough on the tenth hole during the first round of the AT&T National at the Congressional Country Club on July 2, 2009 in Bethesda, Maryland. (Photo by Scott Halleran/Getty Images)  -

Born and raised in Bagdad, Fla., Bubba Watson has always thought of himself as just a good ol’ boy, never meanin’ no harm. Now he’s got the car to back that image up.

Watson purchased the original General Lee car from the “Dukes of Hazzard” television series at a Barrett-Jackson auction on Saturday for $110,000.

Shortly afterward, the three-time PGA Tour winner tweeted: “Just got my dream car!!!” while also posting a photograph of himself with the iconic automobile.

Consider it a classic bit of irony that the Humana Challenge is taking place this week. During the 2010 edition of the event – then called the Bob Hope Classic – Watson talked about earning himself a prize.

Watson finished in a share of second place that week, but earned his first career victory at the Travelers Championship later that season. He isn’t in the field this week.