Stenson clinging to lead in Race to Dubai 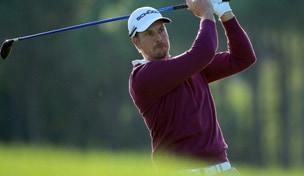 Getty Images
KUALA LUMPUR, MALAYSIA - OCTOBER 13: Stacy Lewis of USA pours water on Lexi Thompson of USA while Jessica Korda of USA looks on after Lexi Thompson won by 19 under 265 on the 18th hole during day four of the Sime Darby LPGA at Kuala Lumpur Golf & Country Club on October 13, 2013 in Kuala Lumpur, Malaysia. (Photo by Stanley Chou/Getty Images)  -

Henrik Stenson is holding on for his Race to Dubai life.

Stenson heads to the DP World Tour Championship this week hoping he can endure one more week of pain in his injured right wrist to become the first player to win the Race to Dubai and the FedEx Cup.

Stenson tied for seventh Sunday at the Turkish Airlines Open to maintain his lead in the Race to Dubai standings, but he’s feeling some increasing pressure from his pursuers heading to the season finale. They narrowed the gap on him again in Turkey.

Stenson has watched his Race to Dubai lead shrink through the Final Series. This is the tightest race going to the season finale since the Race to Dubai's inception five seasons ago.

“All I wanted was to go into Dubai with a chance and knowing it’s in my own hands,” Rose said. “That is the way it is, and so I’m looking forward to the week ahead.”

With $985,476 euros going to the winner of the DP World Tour Championship, a lot of movement is still possible in the season finale. Nine players head to Dubai with mathematical chances to win the overall title.

Graeme McDowell is third in the standings, just 321,800 euros behind Stenson with Ian Poulter fourth, 343,906 euros behind.

With Stenson still ailing, he remains vulnerable. He injured his wrist back home in Lake Nona, Fla., before arriving for the BMW Masters to start the Final Series. This week’s finale at Jumeirah Golf Estates will mark the fourth consecutive week he has played hurt. He knows he’s taking a risk by continuing to play.

“I just hope I’m not damaging anything that’s going to take longer to get fixed later on,” Stenson said after his round Sunday.

Stenson said he intended to skip this week’s pro-am to rest his wrist.

“My preparation is going to be less than I would have liked,” Stenson said.

Here are the top 10 in the Race to Dubai standings (based on euros):