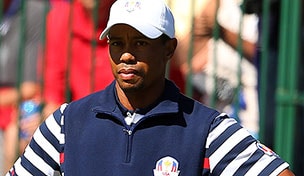 MEDINAH, Ill. – When is a tie not akin to kissing one’s sister?

Answer: When the Ryder Cup is on the line, at least according to the Americans who dropped Sunday’s first five singles matches and lost the cup 14 ½ to 13 ½.

With Tiger Woods clinging to a 1-up lead, and America’s cup chances, in the middle of the 18th fairway he watched Martin Kaymer charge in a 6 footer for par to clip Steve Stricker, 1 up, and assure the Europeans 14 points, enough for the Continent to retain the cup.

Per Ryder Cup rules, Woods and Francesco Molinari continued to play but before the Italian could roll in his 4 footer for par the American conceded the putt to lose the hole and halve the match.

The gesture confused some, including Molinari, because if he wouldn’t have converted the par putt Woods would have won, 1 up, and the Ryder Cup would have ended in a 14-14 tie.

“It was over,” said Woods, who failed to win a match for the first time in his Ryder Cup career (0-3-1). “We came as a team and the cup had already been retained by Europe, so it was already over.”

Love concurred telling reporters, “Whatever Tiger and Molinari do we don’t get the cup. We’re stunned anyway. I stood there thinking, ‘Why isn’t over? Why isn’t it good-good?’ What were we playing for?”

Molinari and the Europeans, however, had a different take on the final outcome.

“I thought about giving him the halve in the fairway,” Molinari said. “But then the captain was there and he told me it’s not the same, winning or halving, so get focused and do your best and that’s what I did. . . . I wasn’t expecting him to give it to me.”