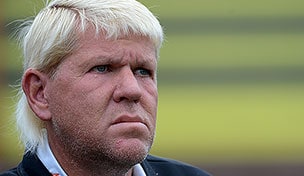 After undergoing surgery in July, he resurfaced last weekend by doing the most Long John thing ever – hitting a drive off another man’s face while hanging out at Losers bar in midtown Nashville.

Video of the incident first appeared on Outkick the Coverage, a college football blog. Daly has since posted his own video of the incident, tweeting “1st day/back outing tomorrow since surgery then back to work—Drive Off 2nite @ #Losers #Nashville #SteveFordMouth.”

Of course, this isn’t Daly’s first time pulling this stunt. Here he is with David Feherty, from a 2012 episode of “Feherty”: