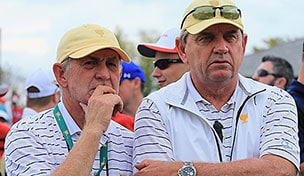 Getty Images
Showing off an impressive swing, Derek Bohlen hits a golf ball from the fairway on Big Break Greenbrier.  -

DUBLIN, Ohio – This week’s weather delays at the Presidents Cup have been particularly difficult for the two captains to make their pairings for each session.

Both captains had to make their selections for the second fourball session and second foursome session before play was completed in the previous round. Unlike the Ryder Cup, where captains fill out their lineup without knowing what the other is doing, the International’s Nick Price, and U.S. captain Fred Couples, match each other pairing for pairing.

That, said Price, has been one of the most demanding parts of the week.

“When you put names in an envelope, your opponent is guessing what you're doing. When you're putting name for name, it's pretty obvious what you're trying to do,” Price said. “He can respond to that. That's a debatable subject. You can always say this is a fair way of doing it. But if I had my wish, I'd prefer to have the envelope to be honest with you.”

The fourth session is scheduled to resume at 7:35 a.m. (ET) on Sunday with the last group on the 10th green, and the captains will have to make their 12 singles selections at 8:30 a.m., likely with players still on the course. The first singles match is scheduled to tee off at 9:10 a.m.

“I've got to take a lot of things into account tomorrow, and I'll confer with my captains and some of the players, most of the players, and see how we go from there,” Price said.