Wie cards 66 for best finish in more than two years 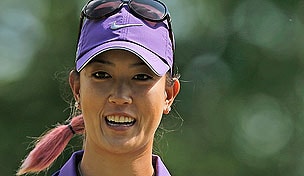 Michelle Wie blitzed Sky 72 Golf Club with a 6-under-par 66 Sunday at the KEB-HanaBank Championship, good for a tie for third, her best finish in an LPGA event in more than two years.

Wie’s bogey-free round was the low score of the day.

It’s Wie’s best finish since tying for second at the CN Canadian Women’s Open in 2011. Wie grabbed a share of the lead Sunday on the back nine in a bid to win her third LPGA title, her first in three years. She posted her score early and then watched Amy Yang and Hee Kyung Seo both birdie the 18th to move a shot ahead of her. Yang defeated Seo in a playoff.

“Like I said, at the beginning of the season, it's coming along,” Wie, 24, told reporters afterward. “It's just taking some time to get together. I feel like my game is finally coming together slowly, I have just been patient with my game and working hard at it. It’s just nice to see that it paid off this week, and hopefully I can finish strong next week.”

Wie needed just 26 putts on Sunday with her unorthodox putting style, where she bends 90 degrees at the waist. While putting has been an issue for her the last few years, she now ranks 28th on tour in putts per greens in regulation this year. That’s up from 59th last year and 82nd in 2010.