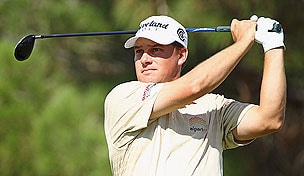 Getty Images
CHASKA, MN - AUGUST 15: Padraig Harrington of Ireland plays his second shot on the 16th hole during the third round of the 91st PGA Championship at Hazeltine National Golf Club on August 15, 2009 in Chaska, Minnesota. (Photo by Stuart Franklin/Getty Images)  -

LAKE BUENA VISTA, Fla. – Most guys would be biting their fingernails down to the cuticles. Pacing a pattern into the living-room carpet. Enduring heart palpitations that would make an ER doc nervous.

Entering the season-ending Children’s Miracle Network Hospitals Classic, Thatcher was No. 121 on the PGA Tour money list, which meant all he needed to do was make the cut and his playing privileges would be retained for next season.

Instead, he missed it. By a single shot.

And so Thatcher left Disney World – passing a sign reading, “Where Dreams Come True” on the way out – with his dream of keeping his card very much in limbo, his fate left in the hands of others trying to secure the very same goal.

Rather than fret over the projected money list like an expectant father, he played the role of accepting father at his home in The Woodlands, Texas, casually keeping an eye on the final-round proceedings.

“I’ve got two little kids here at home, so I was busy being Dad,” he explained. “I tried to stay away from it as much as possible, though I wasn’t totally successful.”

How was he able to remain so calm when his career was hanging in the balance? It’s because Thatcher has been through enough crucially close calls he could make a Hollywood producer cringe over the seemingly far-fetched scenarios.

There was the time in 2001, just a year out of Auburn University, when he was playing in the finals of Q-School. Needing a par on the last hole – No. 9 at Bear Lakes in West Palm Beach, Fla. – his approach shot flew the green, hit the cart path and bounced over the clubhouse roof. He made triple bogey.

“If you’re going to fail,” he said, “it’s probably the most spectacular way you can fail.”

Thatcher played the Nationwide Tour for two years, then found himself in a similarly precarious position at the 2003 edition of Q-School. This time he needed to make birdie on the final hole and rolled in an 18-footer to clinch his PGA Tour card for the first time.

“I knew I needed to make it,” he recalled. “That was a tremendous boost of confidence for me.”

And so he reached the big leagues and lived happily ever after? Not exactly.

Instead, Thatcher found himself back on the Nationwide Tour before too long. In 2007, he enjoyed a breakthrough season, leading the developmental circuit’s money list for much of the campaign.

Heading into the season-ending Nationwide Tour Championship, there were only three players who could win and overtake him for the title. Richard Johnson was one of them and did just that. While Thatcher still earned his card, he lost an exemption into The Players Championship and immunity from the reshuffle.

Crazy circumstances – and we haven’t even gotten to the good stuff yet.

Two years ago, Thatcher entered the Disney tournament at 119th on the money list and – like this year – missed the cut. Forced to spend the weekend at home, he watched every shot and pored over the projections until he coolly found himself safely inside the number at week’s end.

Then came his real Cinderella story at last year’s edition of the event. At 179th on the money list entering the week, Thatcher joked that he was using the tournament as a practice for Q-School, then raced to a four-stroke lead through 54 holes.

Though he couldn’t maintain the lead, getting lapped by Robert Garrigus on the back nine, Thatcher knew a solo second-place finish would be enough to retain status. Needing to sink a 6-foot par putt on the final hole to reach that number, he made it, ensuring his membership for yet another season.

“That was the most well publicized of my late-season theatrics. I had a really horrible year and was able to put a lot of things together that week,” he explained. “The unique part about last year is that I was trying to win my first tournament, but my secondary goal was finishing solo second to retain my playing privileges for 2011.”

Ah, yes – 2011. It wouldn’t be a money-list bubble if Thatcher wasn’t firmly ensconced and such was the case once again this week.

Following an opening-round 4-under 68, he was at even par in his second round at the more difficult Magnolia Course before making a bogey on the 14th hole. His birdie attempts burned the edge on the next three holes. Knowing he needed par on the last to likely make the cut, his season boiled down to one poor swing of the club.

“I hit a good drive, then just made a bad swing,” he said. “I hit in the left bunker and didn’t get it up and down. If I had parred the last hole, I would have been safe.”

Instead, Thatcher headed home and watched – or, as the case was, barely watched. He didn’t know when he was 125th at one point by a mere $45. Didn’t know when D.J. Trahan knocked him out of that position with a final-hole birdie minutes later. Or when Sunghoon Kang sealed his fate with a birdie of his own soon thereafter.

He has already signed up for Q-School and will try to regain his playing privileges through the annual grindfest in December. Even if that doesn’t happen, he’ll still have a job next year. Sort of.

This may be the unfavorable end to Thatcher’s season, but – like so many others – it’s hardly the end of the road.

“Going into Q-School, I’m going to be in as good a shape as almost anybody,” he contended. “I’m partially secure for next year – not as good as the guy who finished 125, but I’m not done yet. It’s just going to make 2013 that much tougher.”

Based on Thatcher’s past experiences, “tougher” should be pretty normal by now. 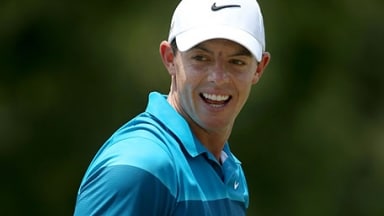 After Further Review: Does Rory have a real rival?

In this edition of After Further Review, our writers weigh in on Rory McIlroy and rivalries, a wealth of young American talent, and a curious confluence of circumstances involving the number 59. 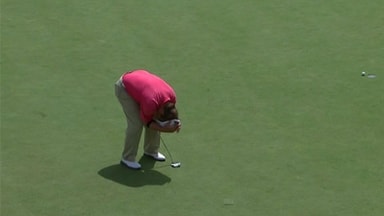 Watch: Thatcher misses bid for 59 by an inch

Roland Thatcher was an inch from history at the BMW Charity Pro-Am, missing a birdie putt for what would have been a 59. 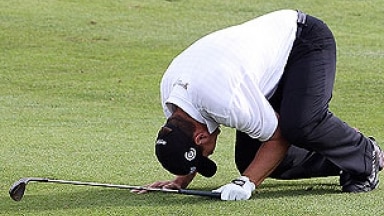 Sobel's memorable moment: To each his own

Everybody remembers Bubba Watson at the Masters and the Miracle at Medinah. Jason Sobel weighs in with a more obscure 2012 moment.