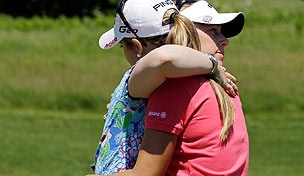 GLADSTONE, N.J. – On the 13th tee of her semifinal match in the Sybase Match Play Championship against Azahara Munoz, Morgan Pressel was informed that she had violated the LPGA’s pace of play policy. At the time, I was standing next to fellow commentator Phil Parkin, and we exchanged a look of disbelief. Little did we know what would transpire three holes later, but at the time, the penalty seemed unprecedented. It wasn’t.

LPGA rules officials routinely enforce policies to the letter of the law. It’s not fun, and to a person, none of the officials ever want to be the “bad cop,” but they view it as an integral part of their job, and I, for one, applaud them.

The timing of Pressel’s penalty couldn’t have been worse, and the resulting impact on the match was regrettable, but a policy with teeth that goes unenforced, becomes a non-policy.

Video: Anatomy of a slow-play penalty

Sobel: A matter of timing and common sense

Rules officials across the board are loath to impose slow play penalties – it’s simply human nature, and they’re even more reluctant to impose those penalties on the player or players in the group who are regarded as faster players. Ideally, the rules and policies would only penalize the “known” culprits. By all accounts, in the case of the semifinal match between Pressel and Munoz, it was Munoz who was the more egregious offender of slow play. But Pressel wasn’t exactly Mika Miyazato (the player I’ve observed as the fastest on the tour).

Through two warnings and notification of being on the clock, Pressel did little to speed up. Having watched what happened from hole Nos. 8-12, and having listened to her interview with Val Skinner (which took place an hour and a half after the match concluded), I’m left to assume that Pressel never thought her pace of play was the problem and that she wouldn’t be penalized.

Slow players cheat the system, routinely, on every tour. They speed up when they’re placed on the clock, and once they’re back in position, they go back to their old ways. It’s as old as time. Therein lies the problem with any objective slow-play policy. However, Pressel’s perceived disregard for the system cost her greatly and might go down as the most expensive penalty in LPGA history.

I was standing next to LPGA official Doug Brecht, to the side of the 12th tee, when he informed me that this match was officially on the clock. I saw the exact moment when he started the timing of Pressel (who was first to play), and I can tell you first hand that he used great discretion as to when to start the clock. And even with that extra allowed time for things to settle down on the teeing ground, she still took 57 seconds to play the shot. Gusting wind, a change of clubs, and a lengthy discussion with her caddie all played a part, but she never appeared to be in a hurry.

By hitting only three shots on the hole, and with the additional 10-second grace period, Pressel was in breach of the rule by 39 seconds – or more than 50 percent of the allotted time. In my view, that blatant of a violation should never receive a blind-eye on behalf of any official. To make matters worse, Munoz missed a short putt to tie the hole, and the loss-of-hole penalty effectively became a two-hole penalty. However, Pressel still teed off on the 13th hole with a 1-up lead.

Clutch putts by Munoz on 15, 16, and 17, combined with missed putts by Pressel on the same holes (and a three-putt on 17) gave Munoz the victory.

Arguments that officials should never decide a match have been flooding my inbox for the last 24 hours, but in this case, I defend Brecht for doing his job, and simultaneously remind people that Munoz won the match on the last three holes – the same three holes where Pressel lost it.

As for the incident on the 15th green, in which Pressel accused Munoz of grounding her putting in her line, I’m sure that Pressel will regret ever making that claim in the manner she did. I’d feel safe in saying she already does.

With Marty Robinson watching the match closely as the referee, any rules infractions would/should have been observed and penalized. It wasn’t a pretty moment for anybody – especially Pressel. Keep in mind, she didn’t accuse Munoz of cheating. Rather, she accused her of inadvertently being in breach of a rule. Either way, it smelled of desperation, and was eventually settled in the appropriate manner.

In the end, both Munoz and Pressel took the high road and buried the hatchet even before the final match. When Pressel made her way out to the final hole to congratulate Munoz on her maiden victory, it was a moment I’ll never forget. I wasn’t the only one getting misty at that moment.

Lost in all of this is the fact that Munoz was clutch when it mattered most, that she handled the adversity with grace, that he was humble in victory. And most of all, lost in all of the controversy was the fact that Munoz lost her grandmother on Monday and was playing with a heavy heart all week. Her parents told her to go win one for the lady with whom she shared a bedroom until she left home at 13 years old to pursue her golf dream. And in the end, one of the kindest young ladies on the LPGA achieved that very dream – for herself, and for those closest to her heart.