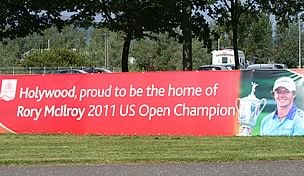 HOLYWOOD, Northern Ireland – Take a right off of High Street onto a byway masquerading as a two-lane thoroughfare. Wind through a quiet, middle-class neighborhood, past the McIlroy family home, until the road narrows and a large rock wall gives way to Nuns Walk.

At the end of that steep path looms Holywood Golf Club, all 6,118 rolling yards of it. The end of the road or maybe, at least for Rory McIlroy, where it all began (check out photo gallery).

The game’s newest major champion returned to Holywood just days after rolling over the field last month at Congressional by more than a touchdown and in a snapshot from the club’s modest balcony the world learned all it needed to know about the 22-year-old.

“It’s a working-class club . . . we wear jeans,” says McIlroy’s father, Gerry with a proud nod. “Good food, good drink, we just want to come in and enjoy ourselves.”

Before his son become golf’s resident alpha male, before this village of 13,000 was transformed, however prematurely, into ground zero of the post-Tiger Woods era, Gerry McIlroy was the quintessential Holywood member – a scratch player who was much more blue collar than blue blood.

There is no practice tee at Holywood, just two bays with well-worn mats and a net, and at just over 6,100 yards it would never be confused for the sprawling ballparks that now dominate the game, but in almost every way the club that opened in 1904 was the perfect place for Rory McIlroy.

The junior program is robust, with about 185 players, and the competitions are fierce and regular, at least until McIlroy moved on to his major-winning ways.

“By 12 he was on the senior teams, beating grown men off 2, 3 handicaps,” said Stephen Crooks, Holywood’s head professional. “He was tiny, absolutely tiny, but an unbelievable talent.”

In this the golf world is catching up to what the rank and file at Holywood have known for some time, and McIlroy’s resume, if not his life, is fixed onto the walls of the inviting clubhouse.

From his victory at the 1998 Doral-Publix Junior Championship to the banners celebrating his Congressional walkover adjacent the 18th green and on the clubhouse balcony, his steady climb from prodigy to prince is documented like a collection of evolutionary snapshots.

Although he rarely plays Holywood anymore, opting instead to practice at his own facility he had built at his house about 17 miles from Holywood, the “working-class club” is still part of McIlroy’s DNA.

Tucked between photos of his numerous amateur, and now professional, accomplishments is a framed card dotted with the challenged penmanship of a 9-year-old McIlroy. A “thank you” note for a “ballot” the club held so McIlroy could travel to some far-flung competition.

If McIlroy makes the game look easy now, like he did at Congressional, it is only because Gerry McIlroy had been making the impossible seem perfectly normal for years.

To support his son’s golf aspirations Gerry McIlroy worked three jobs, during the day cleaning locker rooms before heading to a local pub to bartend. For eight years he would finish his day behind the wooden bar at Holywood Golf Club.

“I didn’t mind as long as Rory was making the effort,” Gerry McIlroy now shurgs.

In this the young McIlroy learned that there is no substitute for hard work, yet contrary to much of the media analysis the unassuming champion also had “a little cockiness,” says Crooks.

Even as a 10-year-old Gabby Maguire knew immediately that there was something different about him. “When I first met him I gave him a junior menu, you know it had wee hamburgers and wee nuts and bits, and he looked up and said, ‘I’ll have an 8-ounce steak medium-to-well, thank you,’” says Maguire, the manager of Gabby’s at Holywood. “That was the beginning of it all.”

Even McIlroy’s Masters meltdown in April, and his almost real-time rebound at the U.S. Open, was signature Holywood – tough and resilient without a hint of self-doubt. This place, about 15 minutes from Belfast’s city center, endured its fair share of attacks and bombings during the “troubles,” largely because of it’s location just down the road from the Royal Irish Regiment, a division of the British army.

By comparison, a closing 80 on Sunday at Augusta National was hardly a reason to seek therapy. “He called me 20 minutes after (his final round at the Masters), and I said, ‘Are you OK?’” recalls Gerry McIlroy. “He said, ‘I’m fine, as long as I learned from it.’ And he did.”

Not that the high-profile loss was easy on the rest of the nation. In pubs and clubhouses across the country avid fans and casual observers watched as things started to come apart at No. 10 with a drive left into the cabins. From there it was impossible to look away.

“It was like you’ve just buried you closest friend,” says Tom Cotter, a manager with Hastings Hotels which runs The Slieve Donard Resort and Spa adjacent Royal County Down Golf Club where McIlroy is a regular.

It is a measure of what McIlroy’s U.S. Open victory meant to this country of 1.8 million that when he showed up for a game on Saturday at Royal County Down about 20 people gathered on the first tee to watch. By the time he made the turn the gallery had ballooned to 200 and was growing.

A day earlier, a fivesome of juniors inspired by McIlroy’s accomplishments darted around the storied grounds, rolling in 5-footers on the practice green to win the Open “just like Rory.” Aspiring Rorys packed the shorter Annesley Links, there was even a Rory behind the counter, an assistant professional.

“We build our junior programs to see if they take to the game,” said Kevan Whitson, the professional at Royal County Down. “We have about 100 kids in our junior programs and we make them go through a whole course to make it fun. When they’ve passed that it makes them eligible for a season ticket.”

Much like Woods in the United States, McIlroy’s victory transcended sporting lines, particularly in the village of Holywood. A month removed from Congressional signs still dotted almost every shop along High Street.

From Ganges Indian Cuisine to the Lapamanz Giraffe Café, “Congratulations Rory” is etched into every window. At Skinner’s bakery they even created custom cupcakes adorned with McIlroy’s likeness. “We sold a couple thousand or more,” says the attendant behind the counter.

In a strange way, it’s as if Graeme McDowell’s 2010 U.S. Open victory was celebrated, but McIlroy’s breakthrough was a celebration.

A week after Congressional McIlroy returned to Holywood with the U.S. Open trophy in tow, a scene club general manager Paul Gray described as “euphoric” and included about 300 members and more than a few pints. There were no flowery announcements or long-winded speeches, just smiles and hugs. Working class indeed.