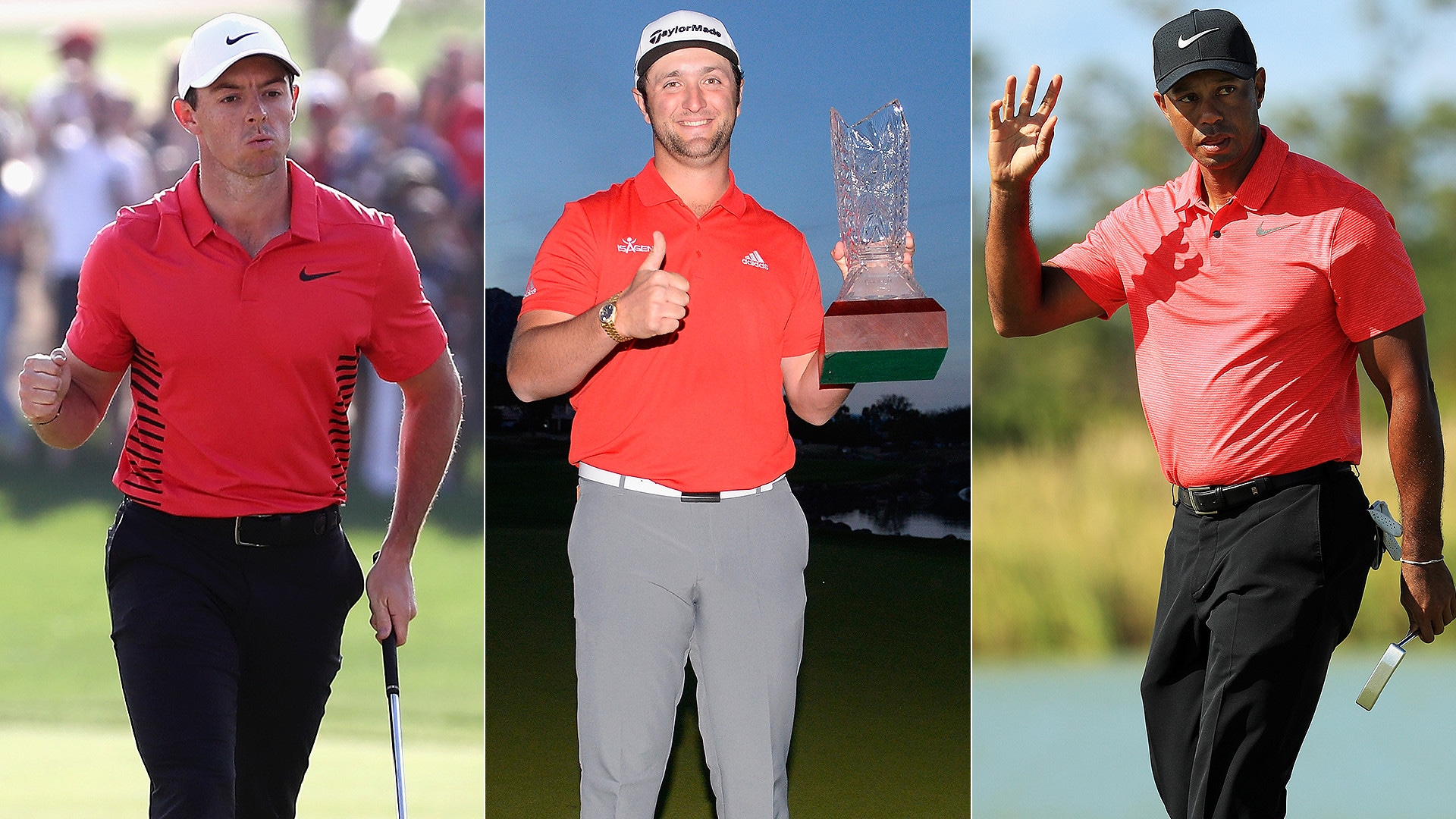 He didn't hit a single shot on Sunday, but the biggest winner of the weekend may have been Thomas Bjorn.

That's because the burly Dane watched one potential European Ryder Cup stud after another either lift a trophy or show significant signs of promise.

First it was Sergio Garcia cruising to victory in Singapore, then Tommy Fleetwood's stirring rally in Abu Dhabi. By the time Jon Rahm finished off the CareerBuilder Challenge in the waning daylight, the European skipper likely had a grin plastered from ear to ear.

There will be countless ebbs and flows of momentum before the first shot is struck at Le Golf National, but this week proved once again that the Americans won't be the only ones sporting some serious depth at the biennial matches.

1. The most dazzling display Sunday came from Fleetwood, who successfully defended his title in Abu Dhabi thanks to an absolutely unconscious back nine.

The Englishman was five shots back when he made the turn, but six birdies over his final nine holes turned that deficit into a two-shot win.

It was in Abu Dhabi last year that he sparked a career turnaround, winning the event en route to the season-long Race to Dubai title. He turned up once again this year with ample confidence and a new wedding ring, and the results were much the same.

He doesn't have the star power of some of his contemporaries, but it's becoming increasingly clear that Fleetwood can more than hold his own against even the best in the game.

2. Hours before Fleetwood caught fire, it was Garcia rolling to a five-shot win in Singapore to complete the transition from tournament headliner to tournament champion.

Garcia was just days removed from his 38th birthday and making his first start with a full bag of Callaway clubs. But he showed no signs of offseason rust or equipment adjustment while capturing his second worldwide win since slipping into his green jacket.

The Spaniard has certainly enjoyed the fruits of his Masters victory nine months ago, but it's apparent that he has no plans to rest on the laurels of last spring.

3. He didn't leave Abu Dhabi with the trophy, but McIlroy may have found something more lasting: confidence.

It was in his first start last year that McIlroy injured his rib and plummeted into a vicious cycle of attempted rehabs and ill-fated comebacks. This time around, he came out of the gates with a relaxed swagger en route to a tie for third.

As Ryan Lavner wrote, it was an ideal beginning to a big year for McIlroy, who has already offered up the notion that 2018 could be the busiest season of his career as he chases the final leg of the career Grand Slam and a return to golf's upper echelon.

After the first leg of a two-week stay in the Middle East, that plan is off to a promising start.

4. Let's take a moment to marvel at McIlroy's record in Abu Dhabi, where he has done everything but win the tournament.

There remain two equally remarkable factors to McIlroy's run: the fact that he somehow hasn't managed to lift the trophy (yet), and the lone outlier: a missed cut in 2013 after his celebrated switch to Nike.

Rahm's 20-foot birdie on the fourth playoff hole proved the difference in Palm Springs, where he entered as the highest-ranked player in the field and supported that status with his stout play.

Rahm barely took his foot off the gas, both across the difficult closing stretch at PGA West and during the playoff when he sent one approach after the next hurtling toward the pin. It's the fourth worldwide win in less than a year for Rahm, who continues to outpace even the rosiest of projections for his burgeoning career.

6. The win moves Rahm past Jordan Spieth to world No. 2, making him the fourth-youngest player to ever reach such heights.

One year ago, the Spaniard was ranked 137th in the world. His win at the Farmers Insurance Open the following week altered his trajectory, and he now finds himself only one rung away from the top of the ladder.

While so much focus has been (deservedly) heaped upon players like Jordan Spieth and Justin Thomas, perhaps it's Rahm who has the best chance to eventually unseat world No. 1 Dustin Johnson. He'll have a chance to chip into that deficit this week as he defends his title at Torrey Pines.

7. Speaking of Torrey Pines, it's officially Farmers Insurance Open week which means that Tiger Woods watch is about to kick off in earnest.

It's something of a tradition to see Woods strolling the fairways of the South Course, where he has won eight times including the 2008 U.S. Open. But this week will bring heightened expectation following Woods' better-than-anticipated return from injury last month at the Hero World Challenge.

Granted, Torrey Pines is a far cry from the forgiving fairways of Albany. But if Woods is able to put together two solid rounds and make the cut, it should be seen as a step in the right direction.

Of course, for all of Woods' success in San Diego, it's also the place where he struggled with chipping yips prior to a withdrawal in 2015 and missed the cut last year in his final official PGA Tour start of the year. So his results this time around might be anyone's guess.

Ken Duke is one of the bona fide nice guys on Tour, and he proved it this weekend in Palm Springs.

Duke is playing off past champion status this season, and he unsuccessfully petitioned tournament officials at the CareerBuilder Challenge for a sponsor invite. With 156 players in the field, Duke was the odd man out at No. 157 and relegated to first alternate status.

He didn't get into the tournament proper, but Duke was willing to step in when Corey Pavin's first Tour start since 2015 ended with a withdrawal after just 17 holes. Because of the tournament's pro-am format, Pavin's amateur partner was left without a pro for the next two rounds.

So in came Duke to play what amounted to a 36-hole pro-am, an effort of good faith to help an event that couldn't find room for him at the start of the week:

Filling in tomorrow for Corey Pavin that WD today @cbgolfchallenge I do things like this a lot to help events and asking for sponsors exemptions here but didn't get any help.

It's not often you see a pro compete where his score only counts for his amateur partner. But such was Duke's situation this week, and kudos to him for handling it with class.

Unusually Short Stay: Phil Mickelson. Lefty has become a regular in Palm Springs, but three shaky rounds left him with his first missed cut in this event since 1994 - a few months before Rahm was born.

Nice Job, Kid: Sungjae Im. The 19-year-old Korean joined Jason Day as the only two teenagers to win on the Web.com Tour, as Im shot a final-round 65 to win the season opener in the Bahamas.

A for Effort: Andrew Landry. Landry put up a stellar fight in Palm Springs, holing a birdie putt on the 72nd hole to force a playoff and going shot-for-shot with Rahm for nearly an hour. He came up short in his effort to win for the first time, but Landry certainly has plenty of positive takeaways from his week in the desert.

On the Disabled List: Brooks Koepka. The reigning U.S. Open champ is out for the next couple months because of a torn ligament in his wrist, with hopes of returning before the Masters. The diagnosis comes after Koepka finished last at both the Hero World Challenge and Sentry Tournament of Champions.

Still the Bridesmaid: Ross Fisher. The Englishman now has 14 runner-up finishes on the European Tour after he coughed up a late lead to Fleetwood. It's been a resurgent year for Fisher, including nine top-10s and three runner-ups in his last six starts. But he's still looking for his first win in nearly four years.

More Euro Momentum: Not to be outshone by Fleetwood and McIlroy, Matthew Fitzpatrick (T-3) and Thomas Pieters (T-5) both started the year on the right foot in Abu Dhabi. Both men were at Hazeltine two years ago, and expect one (or both) to factor on the team in Paris this fall.